I Visit My Books

One of the thrills of being an author is seeing one’s books in a bookstore. When I first moved to Albany, people talked about a famous children’s bookstore in New York City called Books of Wonder. [Note: It didn’t have a website then.] I finally had a chance to visit the store around 2006 when my children were older and I had more time to attend events in the city on my own. The store contained rare editions of classic children’s books as well as the newest releases. Special events with new authors were always well attended, and over the years I met many kidlit people who have become friends. 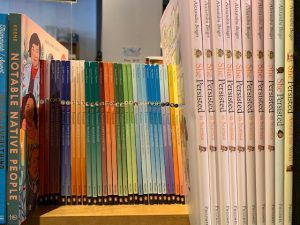 She Persisted: Temple Grandin with its friends!

I dreamed of having my own books for sale at Books of Wonder, and today I had the treat of seeing both my new releases there for the first time ever. Another first! This morning I met my friend and writing partner Susan Korchak (who I didn’t originally get to know there but rather through Vermont College of Fine Arts). Because I was too nervous to do so, she introduced me to Scott, who was working the sales desk, and asked if they had my two books. Two paperback copies of She Persisted: Temple Grandin were on the nonfiction shelf along with Chelsea Clinton and Alexandra Boiger’s picture books and 15 other volumes in the chapter book series. I signed the copies, and Scott and I moved them to a temporary shelf featuring books about neurodiversity for Autism Awareness/Acceptance Month. 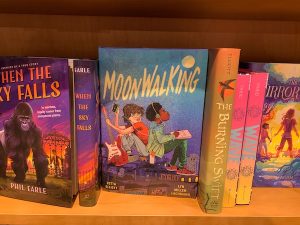 Moonwalking face out on the shelf!

Another staffer guided me to the 10 and up shelf, where I saw five hot-off-the-presses copies of Moonwalking — face out! I did not sign these because there are two authors and Zetta lives in Chicago. It’s not fair to her or to book purchasers to have only one signature, so I gently patted the tops of the hardcovers, took a few pictures, and picked out a new YA verse novel to purchase, Rima’s Rebellion by Margarita Engle. Next to it was a paperback of Your Heart, My Sky, her love story set in Cuba in the 1990s during the special period after the fall of the Soviet Union when the Cuban people faced starvation due to the loss of the regime’s patron. But I already owned the hardcover, having purchased it last year from Books of Wonder.

Seeing my books alongside these other acclaimed titles makes me feel that I’ve arrived. But it also means I need to find five people to buy Moonwalking and two to buy She Persisted: Temple Grandin so the staff feels they made the right decision in carrying my books. Don’t worry. If you buy the last copy, they’ll order more!