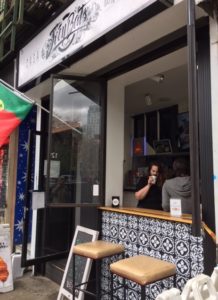 Outside Joey Bats Cafe on Allen St. in NYC.

While running errands on the Lower East Side a couple of weeks ago, I noticed a large Portuguese flag hanging from a building on Allen St. between Rivington and Delancey. Peering up, down, and around, I made out a sliver of a cafe that advertised coffee and pastéis de nata. These small, round custard tarts are a Portuguese invention that have only begun to make inroads throughout the world, but they’re hard to make well and when cold can turn crumbly or rubbery. Missing our favorite spots in Lisbon, Richard and I decided to give these a try.

The pastel de nata we shared at Joey Bats Cafe far exceeded our expectations. Warm from the oven, with a subtly spiced custard and flaky crust, it could take its place with the best of Lisbon’s bakeries. On top of that, I was able to buy my galão (basically a latte), and at a price significantly lower than the chain and independent cafes in the neighborhood. I really felt that I was back in Portugal! 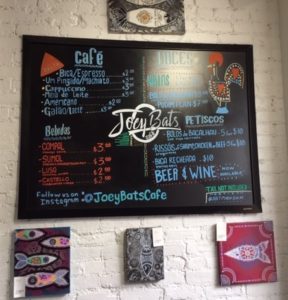 The menu, which includes signature Portuguese sandwiches as well as drinks and pastries.

While Richard and I enjoyed our snack, other customers stopped in. Some were of Portuguese heritage looking for a taste of home. Others had visited and fallen in love with the country’s unique and excellent cuisine. We spoke with Isabel Fernandes, who started the cafe along with her son Joe Batista (hence the name Joey Bats). Isabel hails from the north of Portugal, near Braga, but she settled with her family in Ludlow, Massachusetts, where a second Joey Bats Cafe is located. The one at 129 Allen St. in a blink-and-you-miss-it (so don’t blink!) storefront, opened in summer 2018. 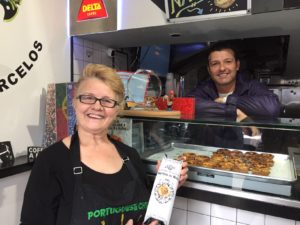 Isabel and her son, for whom the cafe is named. Customers can buy a take-out carton, popular in Portugal.

When we told her that we travel regularly to Portugal, Isabel showed Richard and me photos of a family home that she’s planning to fix up and turn into a bed-and-breakfast or group retreat. Located in a rural area, but with easy access to major rail and bus routes, it would make a perfect spot for, say, a writing workshop, a yoga retreat (these have become quite popular in Portugal because of the good weather and availability of large, relatively inexpensive rural estates), or a cooking school. She also talked about expanding her cafes because she found a company that could flash freeze the tarts so they could be shipped anywhere and reheated, served warm on the spot. This process of flash freezing, by the way, is highly effective in preserving the texture and taste of the pastel de nata, as we discovered when our favorite source in Lisbon, Nata, expanded not only throughout Portugal but also to various cities around the world — Bilbao, Abu Dhabi, Luanda, Amsterdam, Vienna, Peterborough (U.K.), Esslingen (Germany), and Berlin. (The outlet in Bratislava apparently closed.)

A week after our first trip to Joey Bats Cafe, The New York Times gave it a stellar review. I don’t feel as unique anymore, but it does represent additional validation for a small eatery that contributes mightily to the quality and diversity of New York City’s food scene in general and the Lower East Side in particular.