Last Friday I traveled to Philadelphia for a book signing at Wellington Square Books (which is owned by the same people who own Monkey Fish Toys, a destination for LEGO collectors) and a visit to the Friends Select School. My friend and Vermont College classmate Laurie Morrison invited me to speak to her sixth and seventh grade English classes and to have lunch with students interested in writing. Laurie offered her perspective on the visit in this blog post. I didn’t know the students were under so much stress — in those days I didn’t participate in extracurricular activities and thus had far more free time — but I do agree that the kids were articulate and engaged. I had a wonderful time. 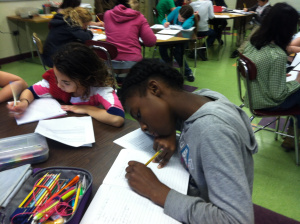 The sixth graders at Friends Select School give Kiara advice on how to make and keep friends.

In the classes, students took on the role of Mr. Internet and gave Kiara advice, much as they did at Hackett Middle School over the summer, though the class periods were shorter and we didn’t have much time to discuss their answers. However, the answers the sixth graders gave led into a good discussion of the importance of going into any challenging situation –whether it be a new school, a party where the other people aren’t close friends, a difficult test, a tryout for a sports team or musical group — with a positive attitude. The sixth graders encouraged Kiara to assume that people will like her, to think of herself as a nice, fun person to be around, to keep trying, and to learn from her mistakes. 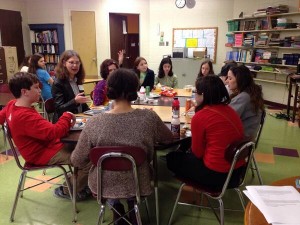 The students and I discussed our writing challenges during lunch.

The students’ advice for approaching challenging situations turned out to be useful as well during our lunch discussion. As Laurie described in her blog, the lunch ended up being quite well-attended, and I’m sorry I didn’t even get to speak with a table of eighth graders who had to sit on the opposite side of the room. (Maybe next year I can come back and speak to them as ninth graders about Gringolandia.) The sixth and seventh graders who sat at the table with me were avid readers and writers, and many of them talked to me about their problems keeping their stories going. “I have a beginning but then I don’t know what to write,” was a common complaint. 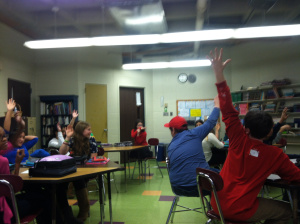 The seventh graders had a lot of questions about my writing process and Rogue.

I asked them if they had an idea of what their ending would be. Many of them did, but they never got that far. They always got stuck in the middle. They asked me if I knew my ending before I started, and I said I usually had a beginning and a pretty good idea of what my ending would be, though it often changed as a result of the major turning points in the middle of my story. I then asked them how far they’d gotten into their story, in terms of pages. Some had gotten as far as twenty or thirty pages.

I suggested that they try to write their entire stories — beginning, middle, and end — in just two pages. While a two-page story won’t have room for a lot of dialogue and description, I though it would help these young writers focus on the bare essentials: characters, what they want, how they go about trying to get it, and whether or not they succeed. There’s not a lot of distance from the beginning to the end, and not a lot of room to get stuck. I said that once they succeeded in finishing a story, it would give them the confidence to expand that story into more pages or to write new stories. 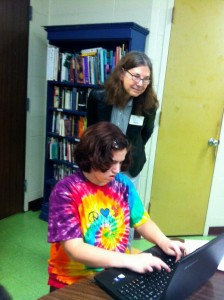 In our discussion at the end of the day, the two librarians and I talked about how the students — most of them able readers — regularly read 300+ page books and feel that’s what they have to write. But every writer starts somewhere, and very short stories can provide the experience of success that leads to longer, more complex works. Besides, flash fiction is very popular these days, and is a form that works well on blogs and other online publications.

And as a bonus, I offer my own “just two-page” story. This is something I wrote in my Portuguese class last semester, following my own advice when I learned to write in a new language. The story, of course, has been translated into English:

The Story of Miguel

Once there was a boy of twelve or thirteen named Miguel. He had an evil older sister and a younger brother who was cuter than he was. Miguel was the one who had to give up his room when his grandfather came to live with the family.

One day, Miguel’s classmates decided to choose soccer teams. But Miguel couldn’t play with them because he had two left feet [Note: This is a rough translation of the Portuguese expression “perna de pau” or “wooden leg”] and no one picked him for a team.

Then, even though Miguel had locked the door, the Hormone Fairy appeared in front of him. She had a magic wand. She waved the wand, and Miguel grew 25 centimeters [almost 10 inches]. Hair grew on his face and body, and his voice turned deep. Miguel promised the fairy that, now that he looked like a man, he would always be a good and responsible man. The fairy warned him that this would be difficult, because from now on, the girls would distract him and drive him crazy.

The next day, Miguel went to the gym and saw an orange ball, larger than a soccer ball. He picked it up and threw it into the basket. A coach was there, and he invited Miguel to play on the basketball team. Because he was so tall, Miguel became the star center.

The more points Miguel scored, the more the girls abandoned the soccer stars and came to watch the basketball games. Throughout the classrooms of Lisbon, kids spoke of the super-tall basketball star who could shoot over the heads of the other players or dunk it in the basket. But Miguel forgot the fairy’s warning. He took his eye off the ball and only looked at his new fans. As a result, he began to shoot air balls, or the ball clanged on the rim when he tried to dunk it. The girls laughed at him. Then they left to follow the next sports stars.

Only one girl remained, a princess. Miguel asked her, “Why do you stay while all the others have left?”

“It doesn’t matter whether you’re a good or a bad basketball player,” she said. “It only matters that you have a good heart and you are a good person.”

Miguel took the princess’s hand. They left the gym together and were happy ever after.