I hope you all enjoyed your long weekend. Years ago, Labor Day weekend in the United States signaled the end of summer vacation and back to school for the kiddies. In much of the country, though, school has already begun, including for my daughter, who is now teaching fifth graders at an international school in Los Angeles. I’m sure her colleagues, former students, and families at her old elementary school in Brooklyn miss her, but runaway bunnies have to do their thing. 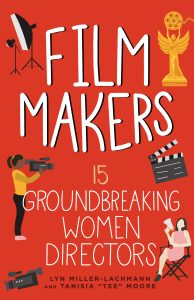 Coinciding with the beginning of the school year for the rest of us, I have a new book launch. It’s Film Makers: 15 Groundbreaking Women Directors, which I co-authored with Tanisia “Tee” Moore. It’s part of nonfiction publisher Chicago Review Press’s Women of Power series, which offers short biographies of women achievers in a variety of fields. Other published books in the series present extreme athletes, earthquake scientists, engineers and coders, entrepreneurs, aviators and astronauts, and wildlife researchers. Forthcoming titles this fall highlight musicians and chefs. 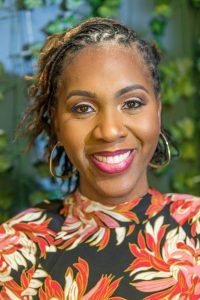 Tee and I have had several interviews for blogs and podcasts, including this one for Girl Talk HQ, where we describe how we came to write the book together, how we divided up the work, our favorite filmmaker stories, recent films we appreciated, and why it’s important to have women represented in roles behind the camera as well as acting. We talk about the male gaze that has dominated films in the past, the idea that women exist for the support or pleasure of men and that’s the way they’re judged. Women who write scripts and direct films offer different perspectives based on their lived experiences. Sometimes these perspectives overtly challenge patriarchy, misogyny, and toxic masculinity; Jane Campion’s award-winning films are examples of this approach. Ava DuVernay’s films connect the exclusion of women from America’s promise with the exclusion of Black Americans as well as their struggle for equality and social justice in films such as Selma and The 13th. Other filmmakers like Greta Gerwig work on a more personal level, giving their women protagonists full agency and complexity. All of them are the change they hope to see, using their position to mentor other women filmmakers and to advocate for equal opportunity and compensation. 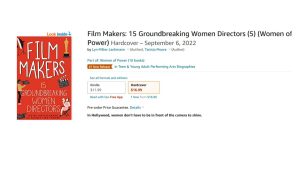 We are pleased that Film Makers has received favorable reviews from trade journals Kirkus and Booklist. Knowing how hard it is for new volumes in series to receive review coverage, these positive reviews are especially gratifying. And…the book has earned a coveted Amazon orange banner, not once but twice! One is in the category of “Teen and Young Adult Film and Television” and the other in “Teen and Young Adult Performing Arts Biographies.” This is Tee’s debut book for young readers — she has two forthcoming picture book biographies in the next year — so she is beginning her career on a high note!

We are grateful to our agent Jacqui Lipton, who brought us together for this project; Kara Rota, our editor at Chicago Review Press; Frances Giguette, our copyeditor; cover and interior designer Sadie Teper; and our publicists Natalie Rodriguez, Valerie Pedroche, and Jen DePoorter for all the work they put in to making this beautiful and inspiring book. Film Makers is for readers ages 10 and up and a great starting point for anyone interested in learning about and making films.

Update 9/7/22: Our interview with Women Writers, Women’s Books on the process of collaboration just went up, with an excerpt from Film Makers about Shonda Rhimes’s collaborations.