The holiday season is a good time to put away the work and spend time with friends, family, and fun things. For this blog, it’s time to talk about some of my recent Lego builds and maybe offer building tips for people at home and creating things with their family. Here’s a link to one that became very popular last year — a homemade Lego skate park that’s been a favorite of the Bricksters ever since (and now has a bright orange restroom for those in need). 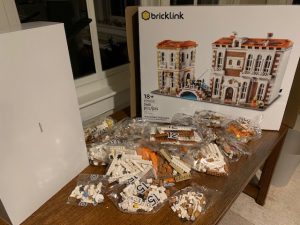 The box for the limited-edition Venetian Houses.

This year, though, I’m going to talk about a rare opportunity I had to support another MOC builder and own a set of which there’s only 10,000 in the world. For a little more than a decade, The LEGO Group has sponsored a program to manufacture and build sets created by fans. My Market Street modular in Little Brick Township is one of them. Nowadays, fans vote on their favorite builds, and two to three times a year, The LEGO Group chooses somewhere between one and five from each cohort of 30-50 proposals to manufacture. Several years ago, after TLG bought the independently-created parts exchange website Bricklink.com, the company decided to hold a contest featuring nine proposals that didn’t get the LEGO Ideas nod. The first five of those proposals to reach 3,000 orders — essentially crowdfunding them — would be made, with a maximum of 10,000. There were five or six rounds in the Bricklink program over a period of two years, and I helped to crowdfund two of them — the modular-design Venetian Houses and a stand-alone 1950s Diner. (Rumor has it that, while the program ended last spring, it will be returning sometime in 2023.) 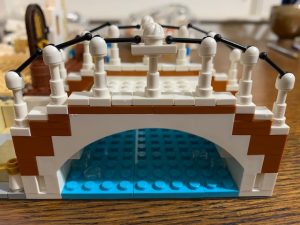 One of Venice’s famous bridges in Lego.

In September, my Venetian Houses was ready and arrived on my doorstep. My friend Walter is obsessed with all things Italian, which may be evident to those who read his essay on the 100th anniversary of Mussolini’s March on Rome and its parallels to the January 6, 2021 insurrection. Venice is his favorite city. So one Sunday, he drove the box from my New York City apartment to his spacious home on the Connecticut shoreline, but having never built anything with Lego before, the box didn’t do him a whole lot of good. That is, until I showed up a couple of weeks ago, assembled it for him, and set it up atop a cabinet between a spinning globe and a framed Italian newspaper. 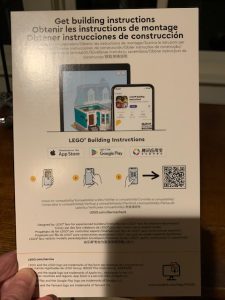 In lieu of the instruction book…

To save money on this limited-edition program, TLG dispensed with the paper instructions in each box and required builders to download an app with building instructions. Because this is the direction the company is moving in, at least for all their expert/adult builds, I became a pioneer in experiencing this option.

I applaud TLG’s efforts to be environmentally responsible, and as someone who lives in a small New York City apartment, I welcome anything that saves space. Will I throw out my existing instruction books and rely on digital instructions if any of my buildings fall to the ground and break apart, or if I have to disassemble and reassemble them for any reason? Well… 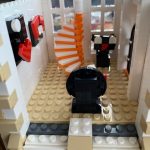 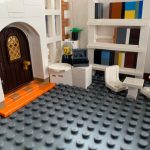 For me, the biggest problem with the app was the demands it made on my aging iPhone. I’ve spent too much money on Lego to afford a phone upgrade with a fresh battery. As a result, my battery died after about an hour or two of building, and charging it at an outlet across the room meant a lot of shuttling back and forth. I suspect the power-hogging culprit is the cute animation that accompanies many of the steps. 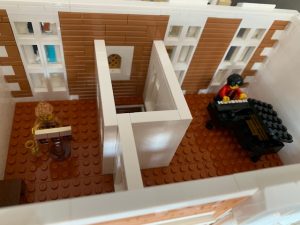 This upstairs music studio feels a bit sparse, though I like the piano.

Being able to enlarge and rotate the directions is a useful feature, though paper instructions can also be turned and put under a magnifying glass. More difficult, though not impossible, is being able to go backward and forward — backward if, for instance, extra parts at the end of a section mean a step must have been missed, or forward to get an overview of where the project is going. My biggest quibble, though, is the fact that the app will only run on a phone or tablet. I would much prefer having a laptop’s larger screen in the background while I build, and I would like to use my phone for other things, like taking pictures of the build as I go along or, you know, answering a call or text. Exiting the app and reentering it only chews up more battery. 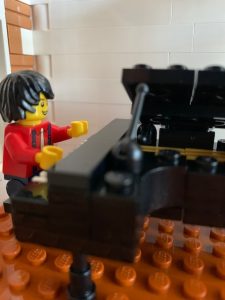 Close-up of the piano.

While I wouldn’t replace my existing print instructions with digital ones, I also wouldn’t avoid building something that only had digital instructions. I still eagerly await my 50s Diner which should be making its way to me in March. And if the Modular line went to digital instructions only, I wouldn’t abandon it. In fact, I look forward to the new Jazz Club , which will be the first modular to go on my lower level next to the railroad tracks, also known as Little Brick Township Underground.

Happy holidays, and if you’re also a Lego fan like me, happy building! 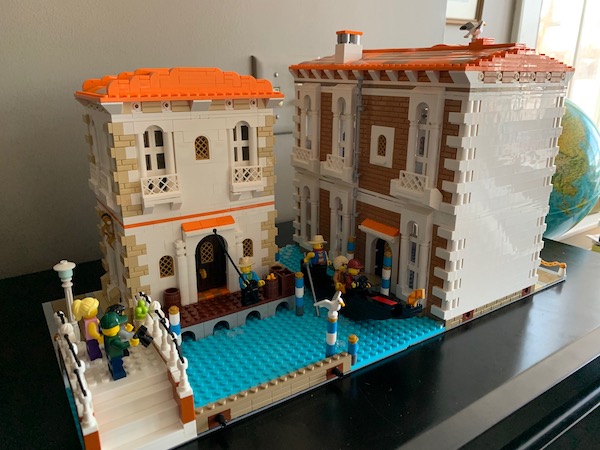 The finished model, which has a flexible arrangement.