Yesterday I returned from a month in Portugal, and my shorter trip — we usually stay closer to two months and take side trips within Europe — meant that I only had one day at the Feira do Livro this year. I went on May 30th, the day after opening evening, for an event that this year will run until June 16. If you’re in Lisbon anytime before that day, I strongly recommend that you go to the book fair, which takes place from around noon until 10 pm, except Fridays and Saturdays, when it runs until midnight. The fair is centrally located in the Parque Eduardo VII, at the north end of the Marques de Pombal metro station and the top of posh Avenida da Liberdade. 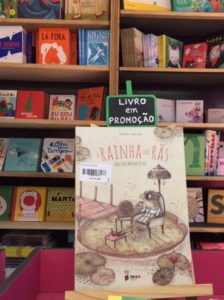 At Bruaá’s booth, the book I translated into The Queen of the Frogs was the day’s feature.

I first attended the Feira do Livro in 2016 and reported extensively on its history and some of the highlights of the three weeks. I’ve gone multiple times every year since then, always returning with an armful of books to read and/or translate. I’ve also seen the fair continue to grow and attract a broader audience. One of the changes I noticed for the 89th Feira do Livro is the addition of two more publisher pavilions, places where larger Portuguese publishers can arrange their various imprints for readers of all ages around an area dedicated to readings, panel discussions, children’s activities, live music, and food and drink. In the past, Porto Editora and Caminho/LeYa have featured pavilions; this year thriving upstarts 20/20, Bertrand Editora (associated with one of the world’s oldest bookstores), Grupo Almedina, and Presença have joined them. I also saw new children’s imprints, ranging from an expanding Penguin Random House in Portugal to Pato Lógico, a small picture book publisher that has won numerous international awards in its young life. Other high-end Portuguese publishers of books for young readers such as Planeta Tangerina, Kalandraka, and Bruaá, also had larger booths and new titles to show. Some of the books I’d translated are no longer available, but I found prominently displayed copies of Eleição dos Bichos (The Animals’ Election), a Brazilian picture book published by Penguin Random House in Portugal, which I translated into English for Nancy Paulsen Books/PRH. It will be out in January 2020 — in time for U.S. presidential election season — with the title The President of the Jungle. 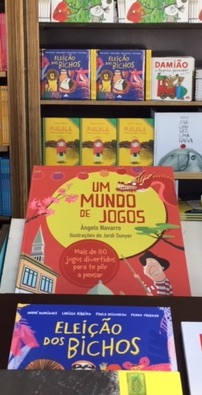 At the Penguin Random House booth, soon to be The President of the Jungle.

At last year’s Feira do Livro I met a doctor from the U.K. who was traveling through Portugal with her adult daughter. This year my friend and writing partner Diana Pinguicha and I met a couple from Canada, near Ottawa, who stumbled onto this special event and liked what they saw. More and more attractions, from the variety of food stands to the live music and free beer (thanks, Caminho/LeYa!), are geared to tourists as well as locals. However, nothing says “tourists welcome!” more than the increasing number of books in English for sale. The entire exhibit of fnac, the entertainment-oriented department store with outlets all over Europe, was devoted to books in English. Diana and I saw many of the hottest books in YA and women’s fiction along with self-help and nonfiction on current events. While I bought my picture books and middle grade novels (along with one recently published title of historical women’s fiction) in Portuguese, she filled her bag with YA novels in English. Diana’s five-year-old bearded dragon, Norbert, basked in the son and in the attention of festival attendees. He too has become a popular attraction in the years that Diana has brought him along. 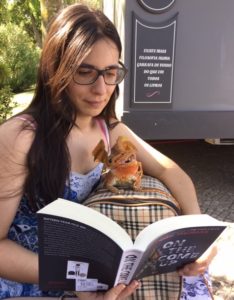 Diana and her bearded dragon, Norbert, read books in English from the fair.

When we walked around on a very hot afternoon, the fair was fairly quiet. School groups paraded through, but the best times to attend for events are evenings for adults and weekends for families. I couldn’t help but think of BookCon, which took place at the Javits Center in New York City while I was in Lisbon, or the Brooklyn Book Festival, which takes place every year in September and features two days of publisher displays and author panels. BookCon is a far more commercial event, one that charges admission and is geared to fans of popular authors, while both the Feira do Livro and the Brooklyn Book Festival have strong family literacy and community building components. With its events over three weeks, the Lisbon fair can make greater inroads into the community than a single weekend offers, and the entertainment goes beyond books to include food and music. Lisbon also enjoys the advantage of large public spaces and a long tradition of public spectacles — the Feira do Livro, for instance, overlaps with Festas Lisboas, the month-long series of public events in June to celebrate the city’s patron saint — not to mention sunnier weather than New York City. While authors are featured, many of them writers of nonfiction commenting on their areas of expertise or the issues of the day, they aren’t the draw as much as the books are. In the U.S., it’s the other way around. Authors with adoring fans serve as the draw for many, and getting into the BBF is the sign of having “arrived.” Getting in to BookCon connotes rock star status. 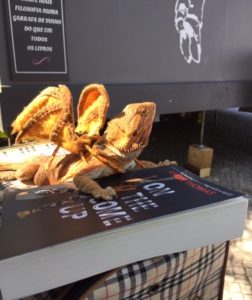 Every year the Feira do Livro gets even better, and I appreciate its vibe of openness, diversity of offerings, and adaptation to the needs of locals and visitors. It plays an important role in building literacy in a country where 50 years ago the authoritarian regime censored books, imprisoned writers, and believed that too much education would foment rebellion. With both tourism and immigration increasing, the book festival remains an important and relevant part of the life of the country.