Last night the New York City LEGO Users Group (NYCLUG) met at the LEGO Store at Rockefeller Center. We talked about growing our membership and organizing community activities that the company has promised to support. At the end of the meeting Sid Dinsay and I installed the new exhibit in the store’s display case. 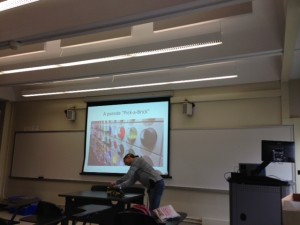 Last fall I talked about how I constructed my Trio Elétrico — in Portuguese.

Sid, aka Brickplate, is no stranger to the Rockefeller Center display case, but this was my debut as an official LEGO MOC (My Own Construction) builder. My contribution to the display was the brightly colored Trio Elétrico, which I originally built as a midterm project for my third semester Portuguese class, where I also had to speak about its construction and answer questions in Portuguese. The card, which Sid printed for the exhibit, is in English, however, and it reads: “The Trio Elétrico is a large sound truck used in the Carnaval in Bahia, Brasil. Popular bands perform live as the Trio makes its way through crowded streets. Here, our house band opens the show while guest stars Lego Daft Punk wait in the wings.” 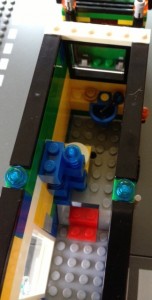 For nervous performers, the interior of the Trio Elétrico has a bathroom at the opposite end from the staircase to the stage.

The Trio is not my first MOC, but it’s the largest one I’ve built so far. For the base, I used a LEGO City excavator transport truck (set #4203), which I bought at the LEGO Store in Chicago when I attended the American Library Association meeting in summer 2013. At the same time, I bought two large containers of loose bricks at the Pick-a-Brick Wall, mostly 1 X n bricks in yellow, green, and blue — the colors of Brazil’s flag. I added some plants that I could arrange around the stage, as well as a number of 2 x 8 and 6 x 8 black plates for the stage itself. I utilized doors and windows from a LEGO Education doors and windows set that I bought several years ago, a drum kit from the Rock Band set, and custom minifigures for the house band and for the two members of Lego Daft Punk. Last week I ordered the laptops for Lego Daft Punk, along with a green bandanna for the drummer. When I was in Japan last month, I picked up the colorful business cards from the Brazilian-inspired fashion boutique Omi Brasil, making that lucky store the “official sponsor” of the Trio.

Sid contributed his Klingon Bird of Prey in a matching bright green color. It appears that the Bird of Prey has its eye on my musicians, with a brave Lego Thomas Bangalter trying to repel the predator with a measly light saber. 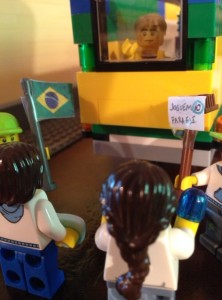 During the World Cup I used my construction to show fans greeting an injured Neymar.

I don’t consider myself a visual artist, and this exhibit is probably the closest I’ll ever come to a gallery opening.  Nonetheless, it was a thrill for me to have my work displayed in this way, to be photographed with my fellow NYCLUG members, and to have tourists from all over the world admire my work. One tourist — I believe from somewhere in Eastern Europe — took my picture standing beside the display and several others shook my hand and asked questions. But unlike my classmates’ questions, none of these was in Portuguese!

If you find yourself in New York City sometime between now and the end of September, stop by the LEGO Store in Rockefeller Center and check out the display. And if you have any questions or would like tips on building your own MOC buildings or vehicles, please comment or contact me. 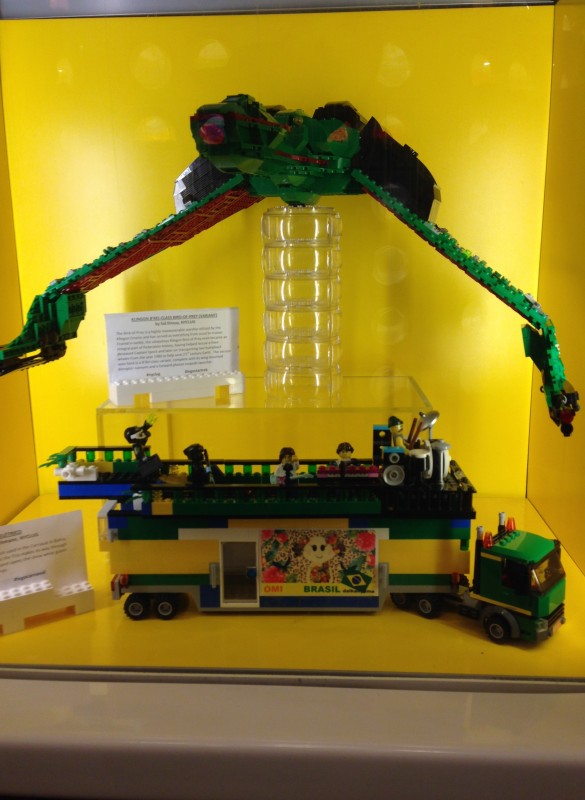 The display at the Rockefeller Center LEGO Store, where my Trio is menaced by Sid Dinsay’s Klingon Bird of Prey.