My Trip Is Scrubbed!

Today I was supposed to fly to Houston with my kids and grandkids. This would have been the twins’ first trip on an airplane, and a pile of gifts awaited them, along with a great-grandmother eager to take pictures of them unwrapping their new toys. 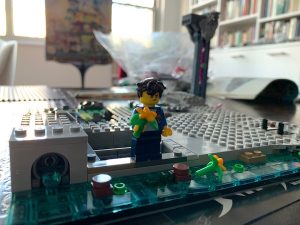 Alas, it hasn’t come to pass. Several family members in Houston tested positive for the new Covid variant (we’re up to omicron now, and it apparently breaks the vaccines as well as immunity from prior infection). My mother has gone into isolation for the second year in a row to avoid catching the virus. Had we flown down, we probably would have carried our own virus from the New York City hotspot or picked something up in the airport or on the plane. Nobody has to be vaccinated or show a negative test to fly within the United States, masks are optional on some airlines and inconsistently enforced on others, and nowadays, the first adjective that comes to mind when hearing the phrase “airline passengers” is “unruly.” 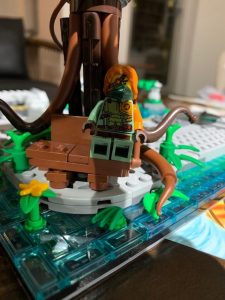 At least Ronin is wearing his mask properly.

Did we want to expose our 17-month-old twins, who cannot be vaccinated, to this? No. Another reason to cancel. In addition, we’ve now heard of a massive wave of airline cancellations because of infections among flight and ground crews.

We are not happy. Derrick and Lindsey wanted to show off the boys and take them to see the lights in Houston. Maddy looked forward to sitting by the pool because the temperature there is hovering around 80 degrees. I wanted to be with extended family for my first holiday season without Richard.

A lot of people this year who’d hoped the pandemic would be over are facing a world of disappointment if not outright hurt. It looks like we’ll be staying here in the cold, but we can still spend the holidays together with a smaller group that includes the twins. Having a bunch of days free that I didn’t expect to have — besides not taking the trip, a freelance project I’m working on has been temporarily put on hold because of the outbreak of the censorship virus — I dug through my stack of not-yet-constructed Lego sets to find Ninjago City Gardens, considered one of the biggest and best releases of 2021. I don’t have the City Harbor set because I found it meager and overpriced, but I plan to join City Gardens with the Ninjago City set I built for Maddy’s class before I found out her classroom was too small for it to fit in. 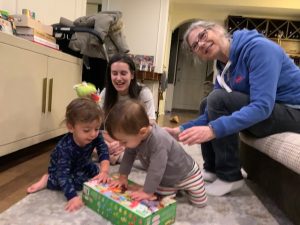 Jonah and Reed are excited for their first Duplo set.

Ninjago City now sits on a shelf that separates my living room from my dining room and is a popular attraction for guests. The new expansion will fill the entire shelf and provide more of a separation between the two rooms as well as a fun play experience for anyone over 5 who visits. The twins, though, will have to wait because they’re still at the stage where they put everything in their mouths. For that reason, the regular-size Lego sets are rated for ages 4 and up for junior builders, and tots can enjoy the large, unswallowable Duplo bricks. In fact, Jonah and Reed received their first Duplo set for Hanukkah at the beginning of December and have been enjoying it ever since. 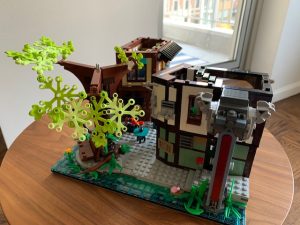 For those who are curious about how to introduce the very youngest builders to Lego, the set I got them is the Number Train. It’s a small set because at that age a large number of pieces could be intimidating rather than inspiring. It’s also fairly generic, allowing for more unstructured play. I usually like to start small with young children so they can learn the basics and expand as their interests and skills develop.

If you parents want to go overboard with giant sets, a better idea would be to get sets for yourself, or ones that are well suited to family building and play. On December 27, The LEGO Group is organizing its second Lego Build Day as families create with bricks and post their pictures on social media using the hashtag #LegoBuildDay. I got a head start a couple of days ago, taking a quick break from Ninjago City Gardens to build this cute little soap dish, which saved me from having to buy a new soap dish for this bathroom. I’m thinking of building soap dishes for other members of the family, but using Dots rather than tree parts because the tree parts sometimes get stuck on the bar of soap, and while it’s easy for me to fix, it may not be for the recipients of my gifts. 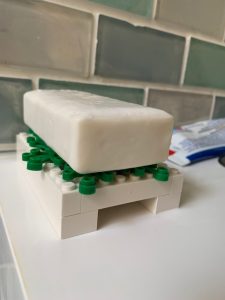 I hope you have a happy and healthy holiday season, and will be back with New Year’s Resolutions (or not, given my record of completing them) next week.

P.S.: For all the people reading “Starting Little Brick Township Underground” for ideas on setting up the Lego train sets, I have additional tips on getting the most out of your train set. Use the comments section here or in the earlier post to ask any questions or contribute your own tips.