A couple of weeks ago, I attended my first conference of the Historical Novel Society. It was supposed to be held in person in San Antonio, Texas, but the pandemic forced the event online. Many of the people I know who attended the 2019 conference (held in alternating years in the U.S. and the U.K.) had a good time, but since they didn’t have new books this year — or perhaps were suffering Zoom fatigue — they didn’t attend. However, I’m just getting back into publishing and like a debut author wanted to catch up on industry trends and do a little networking before my two historical novels launch in 2022.

Catching up on industry trends was definitely the best part of the event for me. Among the dozen workshops and conversation I attended was one on dual timelines. For those unfamiliar with the terminology, as I was before the panel, dual timelines refer to two or more separate stories (not flashbacks), one set in the past and one in the present, or all of them set at different times in the past.

Historical fiction has long been a hard sell compared to other genres, and writers have tried to find ways to make reading about the past more palatable to present-day audiences. In some cases, they’ve added elements of fantasy to appeal to readers of that popular genre. Time travel is another way of connecting events in history with current concerns.

Writers who wish to stay within the boundaries of what is real have other options. Two popular methods of connecting a past story to a present one are to have a young person interview or read the letters of an elder, or to have a scholar come upon an archive that presents a hidden history. These become the jumping-off point for narrating the story set in the past (or the more distant past). The former is more popular in books for children and teens, although there are many examples of adult characters learning about their families’ pasts. The latter is more common in adult literary fiction and mystery because of the level of knowledge and life experience required for the present-day protagonist.

The panelists urged prospective writers of realistic parallel timelines to consider other ways of connecting the multiple stories besides the most often used ones. They also discussed the need to incorporate these stories believably and seamlessly. The authors who presented on various panels said that historical fiction is more likely to find a publisher if the writer can connect the events and themes of the past to readers’ experiences today. Parallel timelines makes the connection clearer, more obvious, but it has to be done well, without preaching to the reader. 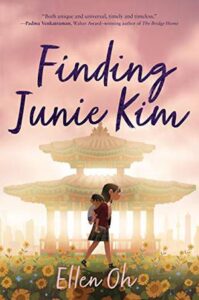 Listening to the panel made me think of a parallel timeline story that I recently read and appreciated — Ellen Oh’s Finding Junie Kim. About half of the novel takes place in the present, when Korean-American middle schooler Junie fails to speak out against racist and antisemitic graffiti in her suburban community and in doing so risks her friendship with two of her oldest friends. Right away, I liked how the protagonist in this friendship story is the one who wants to fit in socially; most often in these kinds of middle grade novels, the girl protagonist’s friends become more social or interested in boys, leaving the more innocent/bookish protagonist behind. Yet Junie’s silence in the name of cham-a, a silent stoicism so as to fit in and not be a burden, has its costs. When those costs prove too difficult for her to bear alone, she turns first to her grandfather and then to her grandmother, survivors of the Korean War who have built a full life in the United States.

Her grandfather’s parallel story is one of watching the South Korean army, then the Communists, and finally the South Koreans backed by U.S. troops march through their town. Friends who lean toward one side or the other lose everything, even their lives, due to violent reprisals from extreme right and extreme left. Her grandmother, though, had it “even worse,” forced to lead her siblings through a war-devastated landscape in search of her missing parents.

The author, a co-founder of We Need Diverse Books, conveys the deep love between Junie’s grandparents, and between them and Junie. Finding Junie Kim is a story of survival but also one of family ties and how they can help a young person in crisis to move toward both healing and activism. The grandparents’ volunteerism in their community, and Junie’s search for a way to contribute to her school that feels safe to her and uses her talents most effectively, make for a story that seamlessly and believably ties past and present. The three stories reflect unique voices, but are equally compelling. For writers who are considering a parallel timeline novel, this one would be an excellent model.

At this point, I am not writing a novel with a parallel timeline, but that doesn’t mean I never will. I became interested in a multiple point-of-view/collective protagonist when I read several novels in 2011 that used this storytelling technique. I didn’t start my first novel of this kind until 2017. One of the benefits of reading widely in terms of genres and styles is that it plants a seed that will one day flourish.