Categories Menu
Home » Blog » Parents, One of the Best Things You Can Do for Your Child

Parents, One of the Best Things You Can Do for Your Child

My kids always struggled to learn new languages. My son started in middle school along with his classmates, and Spanish classes became an opportunity for him and his friends to cut up. My daughter started French in third grade and continued to graduation, but when time came to take her university language placement tests, she had mastered only one semester’s worth. And while my German-born mother-in-law speaks four languages (German, French, English, Hebrew) fluently and can get by in a few others, my husband’s experience learning French was much like our daughter’s. I used to say to his dismayed mother, “The shoemaker’s kids run barefoot.” 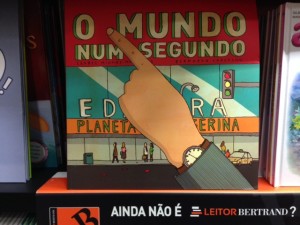 Portuguese original of The World in a Second.

My own first language learning experience — Hebrew in once-a-week  Sunday school — was inauspicious, and I dropped out after only one semester. But when I started Spanish in middle school — a year behind my classmates due to a mistaken placement in a remedial reading program in sixth grade — I quickly caught up and moved ahead, so quickly that I passed my Advanced Placement exam at the end of my junior year. When I dropped Spanish for Italian in graduate school, for reasons explained in an essay for YARN, the Young Adult Review Network, I also made near-perfect scores. The same thing with a semester of French to prepare for a summer in France, and more recently, with Portuguese.

Most people in the United States are like my husband and children, unable to learn new languages. I was headed in that direction as well, with my first foray into learning Hebrew. But what changed? And why is it important?

Today, a 242-year-old representative democracy faces its greatest crisis since the Civil War. With the possibility that hard-fought rights for people of color, LGBTQ+ and disabled people, immigrants, and women will soon be taken away under one-party rule installed by a minority of voters, many people, young and old, are coming to see that their futures in freedom may lie elsewhere. However, only a few similarly developed countries in the world, all of which have restrictive immigration policies, use English as their official language. My own children’s options are limited by their lack of language ability, and they now admit that they wished they’d paid more attention in Spanish or French class. (Regret goes both ways: I wish I’d paid more attention in math class.)

In Europe, most people speak multiple languages. Young people learn English from early on, and at least a fifth of the courses in EU universities are taught in English. That may be reassuring to young people in the U.S. who are considering study abroad, for a semester or for the entire four years. Intermarriage of people from different countries is high, so children grow up speaking both their parents’ languages. In fact, predictions of the breakup of the EU and the retreat to old-fashioned national borders in Europe fails to take into account the reality of multinational families and their free movement across countries.

Because language is inextricable from culture, knowing a second (or third, or fourth) language provides a deep, often unconscious, understanding of the culture and its patterns of thinking. I’ve heard it described as unlocking a door to a secret room, and that’s what it feels like to me. Beyond knowing that one other culture, learning a language both requires and provides a cognitive and emotional flexibility. One has to give up assumptions about how a language is structured, and what familiar words mean, in order to learn a new language. In doing so, one learns new ways of thinking. I write about this process in Rogue, where Kiara thinks about the way the subjunctive is used in Spanish, her mother’s first language, and what it teaches her about emotion:

Quiero que vuelvas a casa . . . The subjunctive. That’s what I like about Spanish. It has rules to tell you about emotion. I want. I wish. I need. I hope. I dream. I’m sorry. When you know something’s sure to happen, you don’t use the subjunctive. You use the indicative. When something might not happen, or has no chance at all of happening, or you really, really want it to happen, that’s the subjunctive. In Spanish you know the difference. English doesn’t use the subjunctive nearly as much, so a person can lie, and the words don’t tell you he’s lying. They don’t tell you what a person is feeling, and without the right words to tell me, I don’t understand. (118)

While Kiara is autistic and relies on spoken-language cues to compensate for her inability to read non-verbal ones, all people can benefit from developing new ways of thinking and seeing others by learning a different language. Flexibility of thought, and willingness to explore the unknown, are important skills to have in times of danger. Those who choose to reinforce their insularity are the first to find their escape routes closed off. This has been true throughout history and it is equally true today.

So kids, you need to pay attention in language classes. And parents, make sure your kids pay attention. Help them with their homework. Learn alongside them. I remember my mother’s bafflement when she quizzed me on Spanish vocabulary. This would have been a good opportunity for her to learn something new. 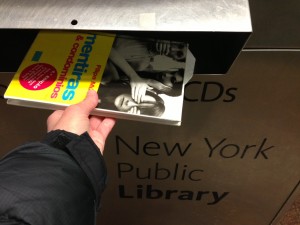 Large urban libraries often have world languages collections, with books to borrow in all genres. This one is women’s fiction in Portuguese.

Today, there are a number of free online resources, such as Duolingo, that help with language learning. I have to admit that I’ve never done well with Duolingo, which seems to focus on discrete vocabulary words, and not necessarily the ones most often used. In fact, in each language, there are about 100 words — nouns, verbs, adjectives, prepositions — that can get you through most common situations. It’s good to practice these with a teacher and other language learners, and to branch out from there. Because of the way my mind works, I need to learn the underlying structure of a language to make progress, but others may not want to begin with verb conjugations and rules for pronouns and possessives. For young children, learning the names of common objects in different languages is a tried-and-true way to start, because it helps the child understand that people in different places call things by different names.

Once I understood the language’s structure, one thing that helped me was reading simple newspaper articles and children’s books, in this way seeing the words in context. I am eternally grateful to the free Metro newspaper and the Uma Aventura… series of middle grade novels when I lived in Portugal in 2012. When reading these, it’s important to try to understand the words in context rather than stopping to look up every unknown word, because stopping to look things up will turn your reading into a chore.  If you see a word you don’t know, I suggest you guess at it, circle it for later lookup in a dictionary, and move on. If you’re completely baffled and can’t read on, then look it up right away. I always need certainty, but learning to read this way has helped me not only learn a new language but also realize that I don’t have to know something for sure before moving forward. In my advanced Portuguese class, two classmates reading an assigned play together spent an hour and a half on the first page because they looked up all the unknown words, while I’d read half the assignment in that time. They then complained and made the teacher drop the assignment. Ouch.

If you’ve successfully learned another language, what methods and resources were most helpful to you? What were some of the things people should avoid, that didn’t work or turned you off from learning the language altogether?