In the years since I’ve been on social media, a new custom has emerged — the Unboxing. This is when authors received their advance review copies, known as ARCs, or their final book. It’s an exciting moment for the author to share with the world, the moment when a book becomes real (or in the case of ARCs, almost real).

In April 2017, before we left for Portugal to live in a new neighborhood, Richard and I went on submission at the same time. I had two manuscripts, two bites at the golden apple. One was a historical novel set in Portugal in 1966 that I’d spent the past 2 1/2 years researching and writing. The other was a proposal for an own voices contemporary middle grade novel that Surviving Santiago‘s publisher, under new ownership and with new editors, requested as my option book. Richard had only one book, but it was a big one, a wide-ranging study of great powers that collapsed, losing their prosperity and influence, and why they’d failed or were in the process of failing. One of those great powers was the United States, at that moment in the fourth month of Trump’s administration, and he compared the fate of the U.S. since the middle of the twentieth century with the Netherlands in the eighteenth century and Great Britain from the middle of the nineteenth century to the current Brexit turmoil. 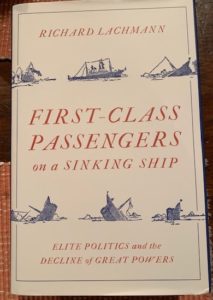 Richard’s book on our dining room table, because we’re dining on his sales. Haha!

Then we waited. Or at least I waited. A month later, Richard had interest from three publishers — two prestigious university presses and the commercial scholarly publisher Verso. By the end of the summer, he’d signed a contract with Verso, which offered the best terms and the most aggressive marketing strategy, one that would make sure his book, which he’d been working on for more than ten years, would sell to general adult readers as well as scholars. Because he hadn’t yet finished the text — most nonfiction sells on a proposal and sample chapters — he had a deadline of the following summer and a publication date of January 2020, 2 1/2 years away.

But 2 1/2 years passes quickly, especially if one has a deadline and is running behind. Fortunately, Richard met his various deadlines, and two months before the official publication date, he has finished copies, a launch party booked, and a small publicity tour. The book, First Class Passengers on a Sinking Ship: Elite Politics and the Decline of Great Powers, is meaty and well-designed, with an appealing cover that captures the content. He looks at present-day trends through the perspective of history, hoping that we can avoid the mistakes of the past if we can understand them better. First Class Passengers on a Sinking Ship is available for pre-order here, here and here.

Because Richard isn’t active on social media, I had to persuade him to make this video, and I appreciate all the well-wishes we received when I posted it to Twitter over the weekend. As we move closer to the publication date, I’m going to spread the word and hit up my far more social media-savvy son and daughter-in-law to help as well. I’m very proud of Richard’s work and look forward to seeing his book out in the world!