Hubby and I have been on vacation for the past week, and our travels have taken us no farther than, for me, the Queens Hall of Science for a BrickFestLive! last Saturday. He never left Manhattan. We hosted the first Seder of Passover on Monday night, which prompted a variation of the first of Four Questions: “Why is this night different from all other nights?” “Because we cleaned and decluttered the apartment?” And we’re falling in love again with our now-clean apartment, which has led me to remove all of my saved searches on StreetEasy.

At BrickFestLive in Queens, I showed builds related to books that promote Lego and reading.

Staycations are great for catching up on work. I’ve already finished a round of revisions on my historical novel for my agent and a picture book translation for another publisher, started a sample translation of a YA graphic novel, and read or reread several contemporary middle grade novels in preparation for my next project, squeezing one adult novel, Akhil Sharma’s Family Life, into the queue. 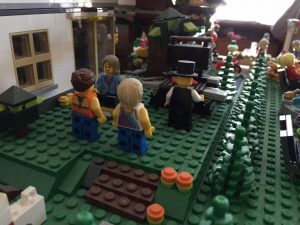 Staycations are also good for catching up with friends.

This year, the staycation has also led me to avoid some of the travel nightmares that have befallen others. My son attended a bachelor party in Phoenix last weekend. His outbound flight was delayed six hours, a delay for which the airline didn’t send notification until he’d already arrived at the airport. He arrived two and a half hours late from his return flight. Several friends taking their families on vacation suffered missed connections that cut their trips short and/or lost luggage that added expense and inconvenience.

Nothing, however, compares to the trip endured by Dr. David Dao, who, seated for his return flight from Chicago to Louisville on United, was forcibly removed and severely beaten by airport police when he refused to give up his seat for airline employees needing to get to Louisville to fly out the next morning. Now, I know that airlines need to have their employees in place, but United’s stingy compensation for volunteers to be bumped led to this crisis in the first place, as the airline selected four already seated passengers to be removed from the flight. Dao had patients to see the next morning. Someone else offered to take his place for $1600 in cash, but the airline staff refused. In theory, airlines have to pay involuntarily bumped passengers forced to stay overnight four times the price of their ticket or $1350, whichever is lowest, plus expenses, but reimbursements are often in coupons for future travel with one-year expiration dates and blackout dates. And since those coupons are discounts from full-fare tickets, they often are a less good deal than buying discount tickets, as my son found out once when he generously gave up his seat for what turned out to be no compensation at all.

Two days later, Dao was still hospitalized in Chicago with a severe concussion and will need reconstructive surgery for his injuries. The video of police dragging him down the aisle (and I wouldn’t be surprised if he was also beaten off-camera) reminded me of scenes I witnessed in Pinochet’s Chile and saw in documentaries of the Civil Rights Movement here in the United States, where Black people in the South lived under police state conditions. The video of Dao’s dragging from the plane has horrified people in the United States, some of whom have never feared the violence of their government in their lifetimes, and throughout the world, who are now watching the unraveling of a 240-year-old democracy. To add further injury, Dao’s local newspaper dragged up some mistakes he’d made in the past, as if to justify his mistreatment the same way the media has justified police and vigilante killings of unarmed Black men, women, and children since the first days of slavery. 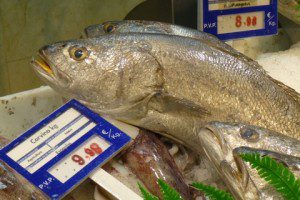 The fish rots from the head down. We have a leader whose business was known for discriminating against Blacks, stiffing contractors, and shoving out people whose homes stood in the way of his developments. As in the days of the robber barons, corporations now use the tools of a police state to enforce their rule against workers and consumers. Our interests are no longer mutual; rather, we are sand in their gears to be washed out with water cannons. Running a government like a business means if you don’t “add value” to the corporation, you’re fired. Corporations aren’t democracies. Shareholders generally have little say in comparison to the top executives and the board; proxy votes are merely window-dressing. Workers can look for another job — if they can find one. Consumers can only vote with their wallet, as I did to a limited extent by cancelling my cable, which is still cancelled, though I have to keep my Internet. However, that Internet will soon be not so open thanks to the projected end of Net Neutrality. I hope this blog survives. Apparently, it’s already blocked in China.

As it turns out, my staycation has become a #grabyourwallet event. And while we’ve booked our flight to Portugal on a non-U.S. airline next month, I have a trip to Chicago at the end of June, and I don’t yet have a flight. A long road trip may be in my future.