I’ve been getting emails about the lack of blog for the past week, and I apologize. About a week ago, my computer developed a malware infestation, which in this case was the digital equivalent of a large family of mice moving into the kitchen. I spent a day on Skype with an Apple technician back in the United States but was still unable to remove the “weekly contest” page that hijacked my Safari browser and rendered it unusable. I will probably have to reinstall the browser, if not my entire operating system — the equivalent of ripping out the kitchen cabinets and appliances and plugging the holes that allowed the rodents to move in — but in the meantime I’m using a different browser, Firefox, and only going to web sites I know are safe. Sort of like shutting the kitchen door and eating take-out.

My Portuguese for foreigners class finally happened, and I’m going to class three times a week. It’s a fun class with two other delightful Portuguese language learners. Valeriya is from Moscow, Russia. She recently married a Portuguese man and will be starting medical school as soon as she passes her language-proficiency test. Dennis is originally from the Netherlands but has been traveling between London and Lisbon for eight years for work. His Portuguese girlfriend is expecting a child in February, so he’d like to settle down and be able to talk to the little one once s/he starts school in Portugal. Valeriya has a lovely accent, and since people’s lives might ultimately depend on her mastery of Portuguese, I hope the teacher concentrates on her. I mean, no one’s going to die if I mix up the words for “kidney” and “liver.” (And if I do, that’s what a copyeditor is for.) 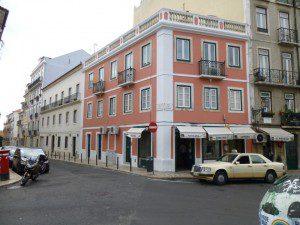 But the main event this week, at least back home, was Thanksgiving. Fortunately, Fulbright Portugal kept us in mind, organizing a tasty Thanksgiving dinner at Lisbon’s School of Hotel and Tourism on Wedensday night. The enthusiastic young students cooked and served turkey with all the trimmings, complete with a range of Portuguese wines. I met some of the other Fulbright fellows and alumni, including a young woman from Minnesota who’s working as the “English language assistant,” which means teaching a class to translators-in-training at the University of Lisbon and helping to translate documents for the Fulbright office.

On Thursday, I joined the other Fulbright professor, Rachel Burk, and her family for a non-traditional Thanksgiving dinner at Spot, a restaurant attached to the landmark Teatro São Luiz. While Richard was away for a conference in Istanbul and later, a speaking tour in Bishkek, Kyrgzystan, Rachel’s oft-traveling husband, The Walkmen‘s lead guitarist Paul Maroon, was in town with his mother, his siblings, and their spouses. Paul’s sister, Ann, and her husband had been in the Algarve several days earlier, where they experienced a rare and devastating tornado. The twister blew out the windows of their rental car and showered them with glass, leaves, and broken tiles, but they escaped unhurt. Eight people in the towns of Silves and Lagoa sustained injuries, but given the amount of damage and the fact that people aren’t accustomed to tornados and thus lack warning sirens and shelters, they were surprised the toll wasn’t higher.

Thursday night’s dinner did not include the traditional turkey — though rest assured that turkey is part of the Portuguese holiday menu on Christmas — but the otherwise traditional Portuguese dishes of vegetable soup, bacalhau (salted codfish), and fried potatoes. We did enjoy an apple pie a la mode for dessert, however.