The Perils of Overtourism

In my travel writing I feel a sense of responsibility. Although I know that not every city, town, historic site, restaurant, or museum is for everyone, I want readers and their families to have a good time when they visit a place that I recommend.

I have a larger responsibility as well. As part of the crew of bloggers and magazine writers who have driven an unprecedented number of tourists to Portugal in the past five years, I’ve seen the downsides of the tourist boom. A favorite neighborhood restaurant refocuses to cater to tourists. Rising rents drive a city’s residents to distant suburbs while conveniently-located downtown housing turns into apartment-hotels. 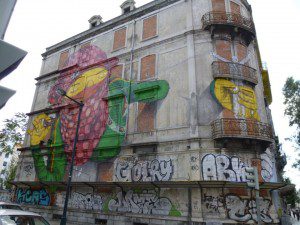 An abandoned building during the crisis.

An economy based mostly or entirely on tourism is an unstable economy. Downturns shut off travel altogether, or fickle travelers flock to the next big location. Of all the nations affected by the crisis of the last decade — Ireland, Portugal, Spain, Italy, and Greece — Portugal has enjoyed the greatest benefits from the increase in tourism accompanying the recovery, even though Greece and Italy continue to host more tourists per capita. Still, without development in other sectors, Portugal remains at risk economically. 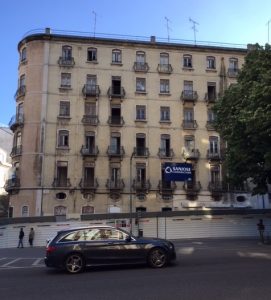 Fortunately, Portugal has benefited from tourism-related sources of growth. When Richard and I first lived in Lisbon in 2012, our friends lamented the country’s lagging exports in comparison to neighboring Spain. “We don’t know how to market ourselves,” they said. That has changed, as Portugal’s exports of wine and other agricultural products have increased along with the number of tourists who have discovered these reasonably-priced and high-quality products. Another change (again a mixed blessing given the numbers of city residents displaced) is the amount of investment in real estate and construction, as well-to-do people facing instability and/or oppression in their home countries move to what is now the third- or fourth-safest country in the world, a country with a stable democracy, liberal social policies, and laid-back attitudes toward the lives of others. The fact that so many young people in Portugal speak English fluently contributes not only to the tourist boom but also to their wider marketability in an information-based economy. The number of web-based small business incubators throughout Lisbon and Porto — helped also by fortuitous investment in fiber optic connectivity before the crisis — is testament to this development.

Still, the rapid increase in tourism is not without its downsides. While Lisbon seems to attract a lot of older tourists and, increasingly, families, other places (Porto, Albufeira in the Algarve) are bigger party scenes. That’s great if you like to dance all night in clubs or want to organize a stag do (also known as a bachelor party) for your best bud. It’s not great if you live in those places that have become huge party scenes, which is why Amsterdam — with a million residents and five million tourists each summer, many of them drawn there by liberal drug laws — attempted to restrict the number of hotel rooms some years ago. Those efforts were thwarted by the AirBnB operators, and Amsterdam remains a lively and growing tourist magnet. 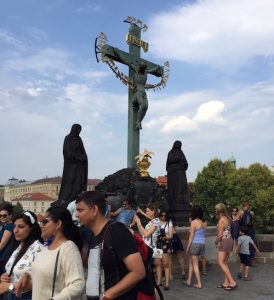 Tourists on the Charles Bridge in Prague, many taking selfies.

I saw the same friction between tourists and locals in Prague, where the cheapest and best beer in Europe draws a huge number of stag dos, along with their female (and significantly more civilized) equivalent, the hen do. While the stag do is a British term and the multi-day parties notorious, Maddy and I saw similar parties of Irish, Danish, and Swedish men, as well as a group of bachelorettes from the U.S. The young American women freaked out when buses passing along the streets sprayed mist in their faces in the midst of a heat wave, and I explained, “They’re being nice to you.” There’s a lot of room for misunderstanding with a greater language and cultural barrier and a local population overwhelmed with the volume and nature of tourism. And local people who are delighted and curious at the first wave of tourism can feel threatened and turn distant later on.

So what are some of the solutions to overtourism that don’t involve simply staying home? The obvious one for the tourist is to remember that you are a guest in someone else’s house, and while they want you to have a good time, that doesn’t mean you barf on the rug or make off with their silverware. Expect that there will be misunderstandings due to language and culture, and don’t get upset. Part of the travel experience is learning, about other people and about yourself.

If you can travel at any other time than the peak summer months, you’ll also have a better chance to get to know the local population. An added bonus: prices will be lower, lines shorter, museums less crowded, and restaurant reservations easier to get. Another solution is to escape the well-trod tourist locations and visit smaller cities and rural areas. Our Portuguese friends tell us about the rural towns, especially in the Alentejo region, that are worth the trip — with historic castles and churches, and opportunities for outdoor activities and wine and food tasting — and rarely visited by tourists. Visiting these places will spread the benefits of tourism while taking the pressure off the main cities and the Algarve beaches. Similarly, one can spend a few days in Prague and then take inexpensive high-speed trains to other cities and towns with historic castles, breweries and wineries, and spas. One never knows what surprises await in these less-visited places, as I found out last summer when I left Richard in the Vienna museums and took a one-hour commuter train to Bratislava.

So spread the love! Travel with a positive attitude and a commitment to making a small footprint. In my next post, I’ll talk about overtourism from the perspective of a local in New York City, one of the world’s most popular tourist destinations.