You may have noticed my post is several days late this week. I try to keep to a schedule of a post every six days, but I’ve hosted visiting family and friends this summer. We’re happy that we can see each other in person again! 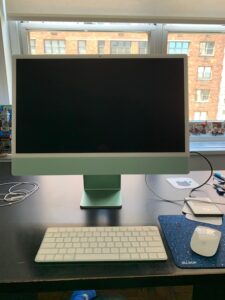 My new computer, a desktop because we haven’t gone anywhere.

There’s another reason too. In the next year or so, five books of mine are due to be published. That means five books are in various stages of production. In case you’re interested in how the book production process works, here’s their current status, with projects numbered according to my best guess of when they’re scheduled to come out. I have not identified any of these because two of the books have not been announced yet.

Book #1: First pass pages. These are where the book has been designed and laid out. It is close to what the final book will look like. The cover is already ready, along with any interior illustrations. At this point, the author makes last-minute changes. It’s also the last chance for the editor to ask for clarification or changes as well. In some cases, an author will have to do a little rewriting so line and page breaks don’t look strange. In this book, I added an extra phrase so the next page doesn’t have a single line. Now it will have two lines. I have two weeks to look over these pages and the PDF reader on my new computer isn’t fully compatible with the publisher’s program, so I’ve dragged an old computer from my closet to accomplish this task. 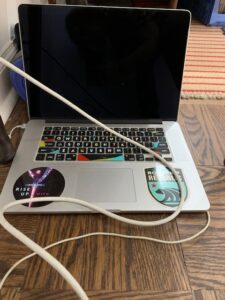 My old computer that will open the PDF files.

Book #2: Preparing for first pass pages. I received a PDF file with questions in preparation for the design of the first pass pages. The PDF reader on my new computer isn’t compatible with these files either. The old computer will get more use.

Book #3: I received my editorial letter for the first round of revisions, which are due in six weeks. I revised one chapter and have 29 more to go. However, I’ve made notes and flagged scenes that need reworking or additions.

Book #4: Waiting for the editorial letter. Until it arrives, I plan not to worry about this one. 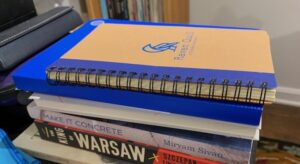 Notebooks with my newest projects and buried underneath, my datebook.

I also need to think of the future. One of the reasons that seven years will elapse between my last book and these is that I didn’t have any books in the pipeline when my earlier books appeared. I did have manuscripts, but they needed work, and in the case of Surviving Santiago, it took many years and many drafts to create a publishable novel. Now that I’m writing more nonfiction, I can sell books on proposal, which keeps me from spending years on a project that goes nowhere and stalls my career. But a key to succeeding in the nonfiction world is being able to meet deadlines and deliver on content-related promises.

This means I have to focus on time management. In the more than five years when my former agent and I couldn’t sell a book, I wrote at what was for me a leisurely pace of one first draft a year, then another year or so to revise. Not counting translations and work for hire, I amassed an inventory of three completed YA novels, one almost-completed YA novel, two middle grade novel proposals (detailed synopsis and 3-6 sample chapters), and more than half a dozen picture books. Without deadlines, I didn’t have the push to write faster. And I’m not sure writing at a slower pace — even with extensive beta readers and rewrites — made for a better book. Only one of those completed projects found a home, although I consider the YA novel in progress — a verse novel — promising.

Now with multiple projects on my plate and new ones (including that YA verse novel) calling, I’m thinking of how to manage my time. Do I work on them in two-hour-long blocks each day, kind of like class periods in high school? Or do work on one until it’s finished, then go to the next? Sometimes it’s hard to plan these things, because some items need action on the spot. But for the most part, I’ve concentrated on one project until it’s finished before turning to the next, and so far, it’s worked for me. Maybe I should set aside a couple of hours a day, though, for the new work. I have to think of the future!

How do you manage your time when you’re working on multiple writing projects at once?