Last week’s conversation between David Bellos and Karen Emmerich, which kicked off the 2020 “Translating the Future” online conference, was a huge success. There were no noticeable technical glitches, and more than 650 people accessed the event live. The videorecording is available at the HowlRound site, along with the transcript for those who’d rather read than watch. 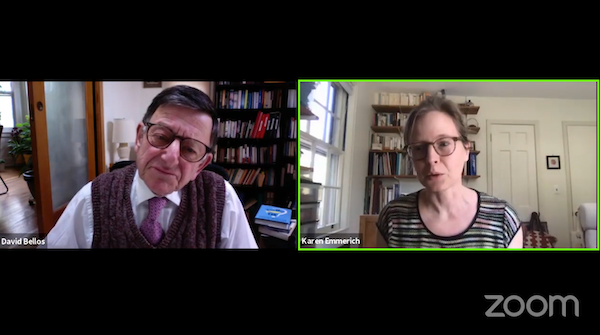 David Bellos and Karen Emmerich via Zoom, talking about how the translation field has changed since 1970.

Having been too young to appreciate the 1970 conference — a morning of cartoons on TV would have been more to my liking then — and relatively late to the field of translation, I found the discussion valuable. In many ways, conditions for translators were much worse in those days. Rarely were translators named or given copyright for their words in English. Considered the “proletarians” of the literary world, they remained isolated from each other and unable to better their lot through collective action. Hence, the 1970 “World of Translation” conference played a major role in bringing translators together in both the US and the UK for professional development and better terms for their work.

Because the full transcript is available, I’ll only discuss the points of the discussion that resonated most with me. One has to do with the kinds of publishers that regularly bring translated works to US readers. The medium-sized literary publishers that did so in 1970 have been gobbled up into what is now the Big 5, with small literary presses taking their place. The smaller presses have less money to pay authors and translators, and more of their funding comes from individual benefactors, non-governmental organizations, and government agencies, including cultural organizations outside the US and UK that are willing to fund translations of their prominent authors’ books. In fact, my first translated book, The World in a Second, received a grant from Portugal’s General Directive of Books, Archives, and Libraries, and Three Balls of Wool (Can Change the World) received financial support from Amnesty International USA. Another recent alternative to the medium-sized literary presses of the past is Amazon, whose international-literature-in-translation imprint Amazon Crossing focuses on both literary and genre fiction from around the world.

The second point has to do with the kinds of people who become literary translators. In 1970, many were also authors of literary fiction and narrative nonfiction. They didn’t necessarily see themselves as translators first, a factor that likely figured into their isolation. Many of them were also emigres from Europe’s many totalitarian regimes beginning in the 1920s. Italian, German, Russian, Spanish, Portuguese, French, Romanian, Polish, Czech, Hungarian, and others were their birth languages, with English acquired later. Russians, both within the country and in exile, were particularly energetic translators in multiple languages and both directions. Today, many translators see themselves as professional translators only. They learn languages in school, and study translation at the growing number of universities and MFA programs that offer coursework in this area. In this sense, I see myself as a kind of hybrid of past and present, an author who studied Spanish and Portuguese both in school and by living in the countries, and who turned to translation as a “publishing-adjacent” career when the evil twins Bad Luck and Bad Choices temporarily halted my career as a writer. Some may see me as a less serious translator as a result, but I think the author-translators of previous decades (who persist in other countries with smaller markets and smaller payouts to authors) have much to offer as well as much to learn from today’s dedicated professional translators. I’ve heard rumors that a later panel will focus on the experiences of writers who are both authors and translators.

The series continues this Tuesday, March 19, at 1:30 pm ET, with a conversation between Madhu Kaza and Lina Mounzer titled “Translating the Uncertain Present.” It’s one of the sessions affiliated with the cancelled in-person and mostly online PEN World Voices Festival, co-sponsored by the Center for the Humanities at City University of New York and the Cullman Center for Scholars and Writers at the New York Public Library. The official description:

For most people on the planet, translation is a key part of everyday life. During the global pandemic crisis, it has become more crucial than ever, both for the information it can convey, and for the comfort a voice speaking one’s own language can bring. How does translation heal or cause trauma, confront or abet authoritarianism? Madhu Kaza and Lina Mounzer will weigh in from Brooklyn and Beirut, to ponder whether translation is a colonial practice or a decolonizing one. Can literary translation advance and defend human rights? Should it?

The event is free but requires a registration to attend. You can register for “Translating the Uncertain Present” here, and watch it live here, with the recording and transcript to follow. If you have questions you’d like the presenters to address, you can send them to [email protected], anytime between now and during the course of their conversation on Tuesday.