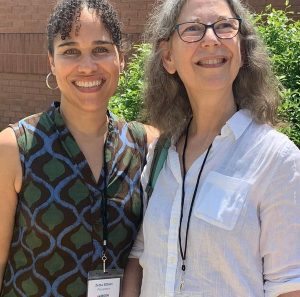 With Zetta Elliott before our panel.

Last night I returned from my first ever invitation-only book festival, the Gaithersburg Book Festival in Maryland. The festival has been around for around ten years, but in 2020 it was cancelled entirely, and last year was a virtual festival because of the pandemic. Despite the persistence of the virus, the 2022 festival went on as scheduled, in person, in a new larger location. The turnout was impressive despite an early-season heat wave, and visitors appreciated seeing their favorite authors in person for the first time in three years. 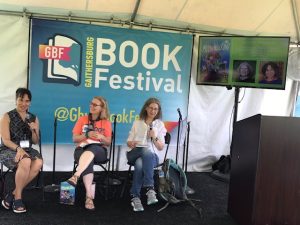 Zetta, Joela, and me at our Moonwalking session. Photo by Lori Steel.

My panel with Zetta Elliott on Moonwalking benefited from the capable and enthusiastic moderation of Montgomery County school librarian Joela Paik, who welcomed each of us with appropriate gifts. Mine was three new residents of Little Brick Township, good friends who await the arrival of a hobby drone that seems to have become snagged in a tree somewhere across town. No matter. They’re enjoying each other’s company and will look for their machine later. 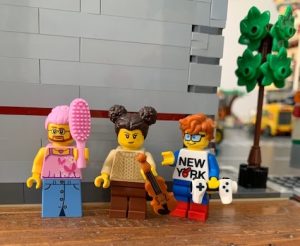 I think the panel went well. The 25 or so people who showed up stayed for the entire event, as we talked about how we came to write Moonwalking, the history that influenced the book (specifically the 1981 air traffic controllers’ strike that President Reagan broke and the work of graffiti artist Jean-Michel Basquiat), and how the book draws from our personal experiences. I talked about my difficulties making friends in middle school and read the poem, “Jakoś To Będzie,” when JJ volunteers to bring his new friend Pie to a SoHo gallery because he likes to ride the trains after school and thus knows the NYC subway system better. The poem ends with JJ’s hope that “Pie will ignore / the missed turns / the wrong notes / my lack of practice / at having / a friend.”

I was also heartened to hear Rep. Adam Schiff, one of the highlighted speakers at the festival, say the same things I said in my panel about the importance of unions and how their destruction — with the 1981 PATCO strike as the pivotal event — has led to both greater inequality and the rise of demagogues seeking to blame the Other (people of color, LGBTQ+ people, immigrants, religious minorities) for the loss of middle class jobs, living standards, and dignity. In the verse novel, JJ’s parents vote for Reagan, not knowing that he would betray the union that endorsed him and set in motion the Pankowski family’s loss of their suburban Long Island home. 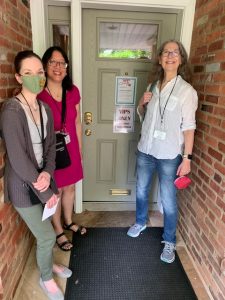 At the VIP House with Amanda McCrina and Diana Ma.

Festivals like these are opportunities to meet young readers, their caregivers, teachers and librarians, community leaders, and above all, other authors. I was thrilled to run into the two YA authors who presented in the tent after Zetta and I did — Amanda McCrina and Diane Ma. I’ve reviewed Amanda’s two novels set in Ukraine and Poland during the Second World War, Traitor and The Silent Unseen, and interviewed Amanda for this blog. This was the first time I’ve seen her in person. I also spoke to Diana over the phone when she received an offer of representation from my agent, and I was looking forward to reading her new novel set in China during the Tiananmen Square uprising of May-June 1989, Her Rebel Highness. My forthcoming novel Torch has many parallels to theirs, and at the festival, we talked about proposing panels for future conferences on YA historical fiction and its echoes in the present. Amanda, Diana, and I posed for photos outside the VIP house. It was our first time as VIPs, and we were enjoying the experience! 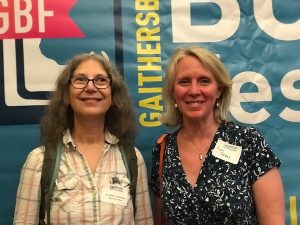 With Lori Steel at the Friday night reception. Photo by Joela Paik.

Finally, I would like to thank the organizers of the Gaithersburg Book Festival for the invitation and the warm welcome, my Macmillan publicist Kelsey Marrujo for taking care of the the travel details, Melissa McDonald the Creative Librarian for interviewing us for the festival blog, Joela Paik for being an awesome moderator (and stepping in at the last minute to do so), and my friend Lori Steel, who showed me around town and made amazing crab cakes because she knows how much I like crab cakes. I look forward to visiting again in the years to come!