Why We Don’t Negotiate

I had promised several people that I would write a post today about active protagonists and why the demand for them on the part of agents and editors excludes writers and characters from marginalized groups. However, the shocking testimony of several Democratic House members about their experiences during the January 6 coup attempt, along with the beginning of the former president’s impeachment trial in the Senate next week, has preempted that post. In fact, this post does have writing advice, but it’s not the main point. Instead, I’ll explore the reasons we don’t negotiate with the violent wing of a political party, or the party that supports such violence.

In my work as a writer of historical fiction and as a translator, I do a lot of research that doesn’t make its way into the final product. Historical fiction gets a bad reputation when writers mire the story in information that may be interesting to them, and to a slice of their readers, but interrupts the action, obscures the development of characters, or inserts a plodding narrative voice. I always ask myself: what does the reader need to know to understand the story and feel a part of it? No less, and no more. 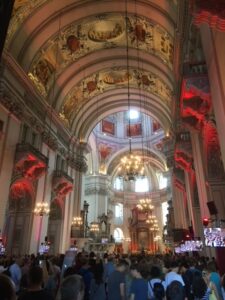 I’m currently working on something set in Austria in the 1930s, and very little of my research is going to appear in the book, but a whole lot of it will appear in this blog post. That’s because in 1934, the country experienced, first, civil strife between leftists and government forces and, several months later, a failed coup that resulted in the assassination of the country’s chancellor (political leader), Engelbert Dollfuss. The coup participants were Austrian Nazis who worshipped Adolf Hitler and sought unification with Germany under Hitler’s leadership. Both before and after the coup attempt, Austrian Nazis engaged in acts of terrorism that resulted in hundreds of casualties.

Little changed in the immediate wake of Dollfuss’s assassination. Kurt Schuschnigg, his Minister of Justice, became chancellor. Coup leaders were deported to Germany, from where they plotted further attacks. The government continued to negotiate with the terrorists, giving them more and more power in exchange for stopping their violence, until a Nazi appointed to the government, Arthur Seyss-Inquart opened the door to a German invasion and occupation and the official “Anschluss” (annexation) of Austria in 1938. The fanatical Seyss-Inquart would go on to commit atrocities in Nazi-controlled Austria and the Netherlands and would be convicted in the Nuremberg Trials and executed in 1946. 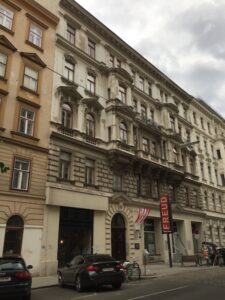 The house of Sigmund Freud, one of Vienna’s best-known citizens, who had to flee after the Anschluss.

The Austrian leaders who failed to act decisively after the 1934 coup and who negotiated with Nazi terrorists weren’t angels. Dollfuss was himself a Catholic fascist who banned political parties and unions, censored the press, and ruled with an iron fist after he became chancellor in 1932. Unlike the Nazis, however, he didn’t worship Hitler, he didn’t want Austria to become a part of Germany, and he didn’t pursue an official policy of anti-Semitism. His absolute rule, in fact, probably worked to his disadvantage when the Austrian Nazis escalated their terrorist attacks in the sense that the rest of the population was politically disengaged and passively accepted whatever happened next. In other words, he and Schuschnigg didn’t have large numbers of people unified behind them to resist Nazi occupation.

There’s a lesson here. Right now, a small but growing cadre of Republican local, state, and national officials have expressed support for violence and a Trump-led dictatorship backed up by bizarre conspiracy theories. Many more Republican leaders encouraged the violent January 6 coup by claiming without proof that the 2020 election was stolen. Some spoke at the rally to whip up the crowd before the attack. Except for a few local officials arrested for attacking the Capitol, they are still in office. Some 140 Representatives and 8 Senators voted to overturn the election hours after the coup failed. They now want to “unify” and “move on from the past” as the impeachment case goes to trial. Historical precedent shows what a bad idea this is — unless one is on the side of Nazis and seeks unity under the jackboot.

A book I translated presents the basic principles of democracy, including the loser of a presidential election doesn’t get to stay on as president.

What is the alternative? A few years ago I translated a scholarly article that summarized the shifting political alliances leading to the 2015 election in Portugal that ended austerity under a Socialist Party-led coalition government. The Socialists, a mainstream social democratic party in Portugal not to be confused with the center-right Social Democratic Party, had long battled the Communist Party and played the key role in exiling the communists from any political power in the country. After the 1974 Carnation Revolution, the Communist Party had a high degree of support because their members in the military and clandestine civil organizations such as unions led the bloodless military coup that toppled the 48-year dictatorship. In 1975, however, both far-right and far-left groups tried to take over in defiance of election results but failed. The result, backed by a highly engaged population and other Western democracies, was a center-left government and the exclusion of both the Communist Party and the right-wing parties from the “arc of governance.” While Communist Party candidates continued to win elections in rural areas that benefited from land reform and in working-class areas around Lisbon, their days of participation in a governing national coalition were over until 2015 — a very long time of political exile.

Right now, we need to impose that term of exile on Trump and his supporters and enablers. His deplatforming is an important first step, and it needs to continue. We still need the reckoning — hearings, trials, and consequences. Legislators who encouraged and gave material assistance to the Capitol attackers must be removed and banned from political office. Democracies cannot include supporters of undemocratic ideologies and forms of rule, as one of the basic principles of democracy is that if a leader or representative loses an election, they no longer hold office. The power is in the vote, not the gun. We don’t negotiate with terrorists, because if we do, they will soon be the ones in charge.