I’m nearing the halfway mark in my Portuguese class. We’ve had one test so far, another next week, and the two-day midterm exam the first week in April. We also received our assignment for the story that’s supposed to be our final project. 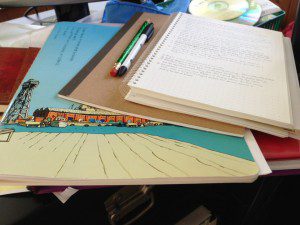 I think the professor was nervous about having me in the class, because the guidelines for the story are quite strict. We have to include present, preterite, and imperfect verb tenses now (because that’s all we’ve gotten to) and later add commands and the subjunctive. We also have to include vocabulary for a house, weather, clothing, sports, celebrations, and professions, and later on, we’ll have to add a party. (And I’m guessing someone will eat or drink too much at the party, because the textbook chapter after that is on health and medicine.) And we have to use certain characters, though the way we use them is more flexible. In other words, we can kill some or all of them off.

I explained to her — in English because my Portuguese still isn’t that good — that what she offered was a “writing prompt.” Writers like writing prompts because it’s hard to come up with good ideas and reducing the universe of ideas — and challenging us to take advantage of what we’re allowed — actually sparks creativity.

Before I started writing my own stories, I used to be into role-playing games like Myst. In those games characters had to pick up objects that would then be used later to defeat enemies, unlock doors, and the like. I enjoyed thinking ahead, trying to guess what kind of benefit an object I’d discovered would give me. I see my professor’s writing prompts as the apparently random objects along the trail; the story comes together when I figure out when and where to use them.