Categories Menu
Home » Blog » A Renovation for the Pirate Houseboat

A Renovation for the Pirate Houseboat

Usually when I build an original Lego creation, known as a MOC, it stays the same throughout its life in Little Brick Township. The only changes have to do with the MOC’s location as more buildings join the town. This pattern changed last week as a result of a new character entering my town’s story. 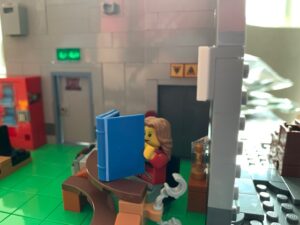 Rita the Receptionist will let anyone go through if the book’s good enough.

I wrote about adding a modified Daily Bugle building to the town, while the minifigures that came with the set went to my daughter who collects pop culture minifigures. To populate my new building, I added some of the town’s existing personalities, among them now-former mayor DiLazio, journalist David W., and Trendsetter’s father, Lou LoBiondo (himself the resident of another MOC). While they’re pictured in last week’s blog post, I have two more people that weren’t featured — Rita the Reading Receptionist, best known for becoming so absorbed in her book that she misses her train, and a new character arrived in town named Adam V. 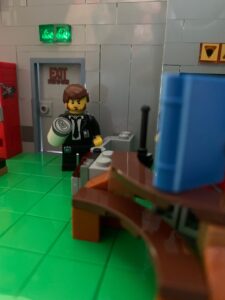 Adam V. late for work. You can tell he hates his job.

Like David W., Adam V. uses his last initial not because he’s one of several with the same name in his elementary school class but because he’s embarrassed to be working at the Daily Bugle. David W.’s embarrassment comes from the fact that he served as the right-hand man of a powerful politician who had fallen into disgrace. He’s using his new job to ingratiate himself with even more powerful politicians and to strike back at the Daily Brick, which exposed his former patron’s corruption.

Adam V. considers his stint with the big-megaphone propaganda outlet a survival job, hoping to save enough money to retire before the age of 40 and return to chasing his dream of playing bass guitar for a punk-rock band. He’s already failed twice — first, with the band that lost its recording contract due to “artistic differences” and then, as the culture czar for a populist politician who decided to zero out the culture budget. 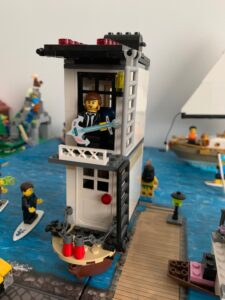 Adam V. doing what he loves, on his renovated Pirate Houseboat.

As evident in the picture of him arriving at his news desk job late and hung over, Adam hates his job. But it more than pays the bills. Adam bought the Pirate Houseboat, and the first thing he did was set about renovating it into a two-story bachelor pad. The first floor now has a full kitchen and barrel sink, along with chairs and a dining room table that doubles as a work table when he’s writing new songs. Upstairs is a queen-size bed and night table. Adam considers the music-themed quilt one of his best purchases. 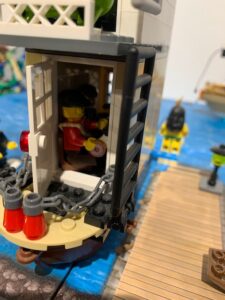 Newsie and Adam V. at breakfast.

Adam is one of The LEGO Group’s newish two-faced minifigures. Thus, while he’s grumpy at work, he’s smiling when he’s home doing what he loves. Here, it’s playing music. He’s already on his way to connecting with Little Brick Township’s other musicians, among them our friend Patricio and newsstand manager and town gossip (when he’s not drumming) Raúl Rosado, aka Newsie.

The renovated Pirate Houseboat MOC, first completed in 2019 as part of my New Year’s resolutions for that year, is one more example of how my town is growing up and down in response to the tight quarters of city living. It pays to be resourceful, as my newest character shows! 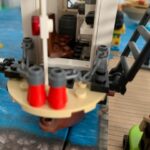 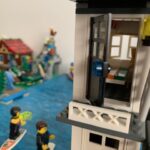 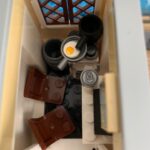