Because I live in a crowded city, buildings expand vertically rather than horizontally. That’s also true of Little Brick Township, my Lego town that has to fit into a small apartment. I recently added another level underneath the main one, with a train track, a station, and a few buildings with space for more.

Thanks to a generous gift from my VCFA friend and author Sandra Nickel, I was able to add two floors to the Grand Emporium, making it the Grander Emporium, and Town Hall. I made the extra floors of Town Hall into a Women in Stem Museum, where I honor, among others, Vera Rubin, the subject of Sandra’s picture book biography The Stuff Between the Stars. 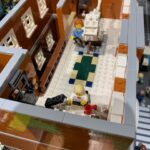 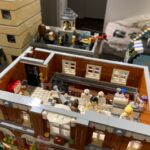 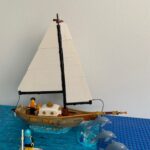 Because I already have two five-story buildings, I figured the height of The LEGO Group’s new Marvel Daily Bugle kit would not stand out in Little Brick Township. My daughter wanted the 25 minifigures that came with the set, as she did with the 123 Sesame Street set, and I wanted the Sailboat gift-with-purchase, so I bought the giant box and wheeled it home on a dolly. Since I’m fitting it into my own diorama rather than the Marvel universe, I modified the build to keep the upper-floor window intact. As you can see from the pictures, most of the pieces to convert the broken window into an intact window are there. The box is short four double-knob SNOT pieces, but they’re not necessary to keep the decorative strips on. For two of the columns I substituted three 1×1 bricks and one 1×1 tile; they come to the same height as the missing SNOT pieces. 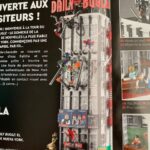 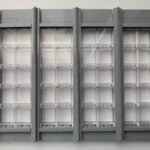 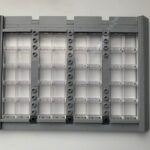 Since I gave Maddy the 25 Marvel minifigures, I filled my building with local Bricksters who work for the Fox News/New York Post-like media conglomerate. Among them are David W., who fawns over the powerful and after being thrown under the bus found a position with the fluffy news outlet Heartlake News. Now the Daily Bugle corporation has purchased Heartlake News and promoted David W. to its main newsroom. Accompanying him in the newsroom are Trendsetter’s father Lou LoBiondo and Ron the Cowboy Photographer. Now that his term is coming to an end, Mayor DiLazio has received a big promotion to the News Director’s office, where he is guaranteed to sleep on any tough stories while printing and broadcasting the corporate party line. 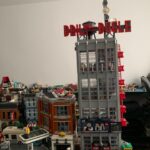 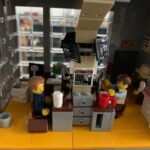 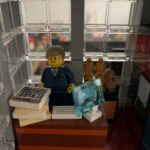 The presence of this status-quo promoting corporate behemoth presents a new challenge to Mireille Jouet and Patricio Marín, the muckraking journalists of the scrappy rag The Daily Brick. Are they up to the challenge? Time will tell, though the good citizens of Little Brick Township have a soft spot for Patricio, who offers rooftop concerts in his spare time and writes poetic ballads based on his sad love life and otherwise troubled and tragic past.

In the meantime, the citizens of Little Brick Township have elected a new mayor, and we’ll see what he does. Will he take bribes to bulldoze parks for shopping centers, like Mayor DiLazio’s predecessor? Will he spend so much time being painted and photographed that building codes go unenforced and steel-and-glass skyscrapers spring up despite zoning regulations? And then go to work in one of them once his term ends? While the township has been a nice place to live for our Bricksters, we need leadership that will keep it that way or make it even better. Having a free press and journalists willing to dig and present the truth is critical to making that happen. The August 2021 version of Little Brick Township. Bigger and better?