I returned to work several weeks ago and am in the middle of multiple projects that will be published in 2022 and 2023.  Last week, I received developmental edits — the first round of editing, addressing big-picture stuff — for FILM MAKERS, the biographies of 15 women directors that I’m writing with Tanisia “Tee” Moore. We turned in the original manuscript back in July, and since then, one of my eight filmmakers made an unexpected (though not sudden because films take a long time to make) career turn which now requires an updated entry. 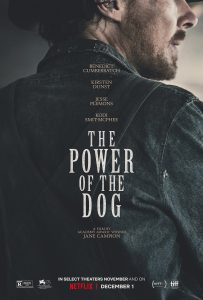 Perhaps because I was working on four other books and dealing with seven other filmmakers, but I didn’t realize Jane Campion had directed a new film until I received the schedule for this year’s New York Film Festival and noticed The Power of the Dog as one of the main features. I had finished Jane’s entry (as the stylesheet requires we use the subject’s first name throughout even though we don’t know her personally), and she had given multiple interviews over the past decade stating that she was only directing for television. She cited the openness to experimentation in the TV world, which enabled her to make Top of the Lake and its sequel Top of the Lake: China Girl. She also felt that pressures for profitability had resulted in stale, formulaic feature films. The environment that allowed her to make bold, groundbreaking films like Sweetie and The Piano no longer existed.

So what happened? Why did she return to feature films after a 10-year hiatus after saying she never would make another one? Clearly, the 1967 cult novel by Thomas Savage set on a Montana ranch in 1925 captured her imagination. But unlike her earlier work, the novel — and the film adaptation with the same title — did not feature a silenced woman finding her voice. Rather, all the principal characters are men, with women playing secondary roles. The film portrays a cruel rancher, Phil Burbank, who mercilessly torments his brother George, George’s new wife, Rose, and Rose’s sensitive teenage son, Peter, when Rose and Peter move from town to live on the ranch.

The Power of the Dog contains a plot twist, as does Jane’s story of making the film. Without going into spoiler-y detail, I can say that what makes the plot twist effective is the way the writer sprinkles clues throughout — subtle details that the viewer doesn’t notice at the time but going back make perfect sense. In the movie, the clues are placed with a light touch and perfect progression, like the breadcrumbs exactly six feet apart that guide lost fairy tale children home.

And Jane’s career plot twist… There’s the expression, “Never say never.” Fans of The Piano will notice many similarities — the atmospheric setting in a remote location in the past (although set in Montana, The Power of the Dog was filmed in New Zealand), colonizers’ subjugation of indigenous peoples, domineering men who see kindness as weakness, and, of course, a piano, which in this case the new wife plays badly. (Again, the most emotionally repressed character is the better musician.)

The other side of portraying women finding and using their voices is portraying men who seek to silence those voices. Commentators have called The Power of the Dog a portrait of toxic masculinity; a man who cannot express who he is exploits the emotional vulnerabilities of others in order to dominate and destroy.

The movie is brilliant, and I expect multiple award nominations. Jane may well become the first woman director to be nominated twice for an Academy Award for Best Director, and I hope this time she takes home the statue. And for those of you who say, “But a woman was chosen last year!” I answer, “How many years in a row did a male director win the Oscar for Best Director?”

In a recent interview, Jane did say she would never direct a Marvel movie, as acclaimed indie director Chloé Zhao has recently done. Do we once again say, “Never say never”? I think in this case, the Jane Campion Marvel movie is never going to happen — the breadcrumbs just aren’t there.