Last week I wrote about my five book projects in the pipeline at the same time. The one that has been taken most of my attention for the past few weeks is Project #5, a nonfiction project that, like most nonfiction projects, sold on the basis of an outline and a single chapter. The entire book is due at the end of next month. Fortunately, I can talk about this project because it has already been announced and I’ve blogged about it here.

The title of the book will probably be FILM MAKERS: 15 GROUNDBREAKING WOMEN DIRECTORS. I’m splitting the directors with my friend Tanisia “Tee” Moore, and each of us is writing about some of our favorites as well as other directors we’ve gotten to know and love. Even if I’m not a huge fan of her films, I appreciate Jane Campion’s struggle not only to make it in a male-dominated film industry but also to defy her upbringing where the pressure was not to achieve on her own but support her husband in his achievements. The specter of #MeToo hangs over many of these women’s careers, and Jane learned that her father, a theater director, engaged in that kind of behavior — with little consequence to him but enormous consequence to the women around him — 60 years before the scandal broke involving Harvey Weinstein. One of the filmmakers I mention in a sidebar (which allows us to talk about other filmmakers besides the 15 with major biographies) cites her own experience with Weinstein as the reason she no longer acts and only works as a director at this point. 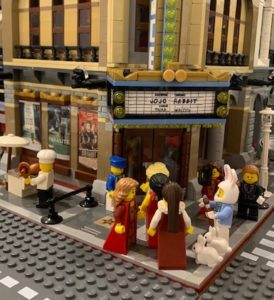 The Palace Cinema marquee has been replaced since then. No spoilers!

I don’t want to give too much away because I want you to buy this book when it comes out in late 2022 or early 2023. However, I’m thinking of putting together a trivia page that will serve as a kind of treasure hunt for readers of the book. If you’re curious as to the filmmakers included, I’ll give you a few hints. Two of them have films reviewed somewhere on my blog (one with multiple films). Another filmmaker reviewed on my blog has a sidebar. One has a film featured on my Lego Palace Cinema marquee.

In researching my filmmakers, I’ve watched a lot of movies and attended online Q&As afterward in some cases. For older films, I’ve taken advantage of YouTube videos along with the usual print sources. In addition to #MeToo, I’ve followed scandals and controversies ranging from accusations that someone rose to prominence because of a family’s or a partner’s connection to condemnation of a film that allegedly glorified eco-terrorism. Not to mention a family secret revealed to the entire world in a worldwide hit movie.

When I was thinking of writing nonfiction for teens, a friend warned me that research expenses can be higher that what the writer receives for an advance, with no guarantee of making any money beyond the advance. Without a big payout, the decision to write the book should center on whether this will be a fun or interesting book to write, and whether it will lead to more writing and publishing opportunities. FILM MAKERS has been a delight to work on, and I have especially enjoyed the opportunity to work with Tee and hear her perspectives on women in the film industry. For the most part, her directors are more involved with popular culture, including directing for TV and big-budget franchises. I’m finding, though, that many of my women started as indie filmmakers but have directed episodes of popular shows and/or are working on films in the Marvel universe.

I’m wrapping up my final biography this week and will send it to Tee for her to write the introduction. I look forward to seeing which themes she’ll explore and the rest of her biographies, as I’ve seen many of the films her directors have made as well. In a few months, we’ll have our cover reveal, and after that, my first nonfiction book for teen readers will be out in the world!

Time for me to start a new one…