People have asked me about the near-takeover of Lego banners on this blog in recent weeks. That’s because winter weather and dangerous new strains of the virus have conspired to keep me indoors, so there’s not much besides Little Brick Township for me to photograph. No one wants to see the books I’m working on — hopefully, they will when the books come out — and they’re embargoed until then anyway. (Yes, exciting announcements forthcoming!) 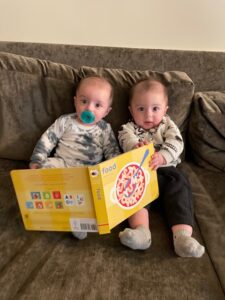 I also received my first vaccination two days ago, so I will go outside and take pictures in a few weeks. I’ll still wear my mask per CDC guidelines, but I’ll feel more secure about my future. In the meantime, my son and daughter-in-law are sending pictures of the twins so I can watch them grow and change from five blocks away. So close and yet so far!

Jonah and Reed are now seven months old. They have their first teeth and are sitting up on their own. They smile and laugh, play with their toys, and read fabric books by putting the pages in their mouth. They’re starting to eat solid food and feed themselves, but most of it still ends up on their faces and clothing. They seem to recognize each other, and when one starts to cry, the other one will now join in. According to experts, this is the beginning of developing empathy, a sense of what another person is feeling and the impact of one’s behavior on another. 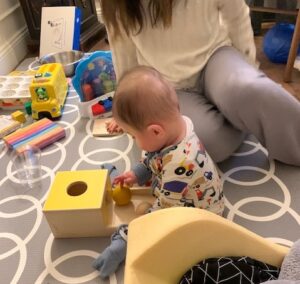 Jonah sits on his own for the first time.

I’d worried about all of us mixing up the two boys, thus leading to an identity crisis, but that hasn’t come to pass. Jonah is still heavier than Reed by about a pound, even though Reed has caught up to his older brother (by four minutes) in height. Jonah continues to have more hair, and as a result, appears more mature. He’s usually the first to accomplish a physical milestone, with Reed following a day later. Reed, however, is the more “talkative” of the two and the most enthusiastic when he does accomplish something.

With warm weather on its way, the babies will take some trips in their stroller, and we plan to meet them outside, until the day when I can go everywhere again. 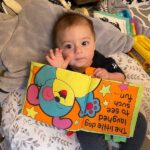 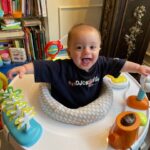