Categories Menu
Home » Blog » The One That Got Away

The One That Got Away

Like many writers, I have agent friends who are not my agent. (In fact, not representing an author is often a good thing for a friendship.) As the friend of several agents, I sometimes hear about “the one that got away” — that is, the writer they offered to represent who went with a different agent, or the manuscript they were reading and loving until the writer emailed them to withdraw the submission because another agent had taken it on.

Editors also have ones that get away. They lose auctions or fail to convince the acquisitions committee. The manuscript goes elsewhere and becomes a bestseller or wins a boatload of awards.

As a translator, I also have ones that got away. In 2018 I saw a new picture book in one of my favorite bookstores in Lisbon, Ler Devagar in the LX Factory. Titled A Guerra (War), it was a collaboration between a father and son, poet José Jorge Letria and artist André Letria. The publisher, Pato Lógico, was one of those small, quirky Portuguese presses that like Planeta Tangerina, publish aesthetically stunning children’s books and regularly win international competitions.

A Guerra is a meditation on war and its destruction, with the narrative rising and falling through the monochromatic pictures that culminate in a wasteland. Words and images evoke emotions that reinforce each other but sometimes clash in surprising and thought-provoking ways. Eager to translate this book, I bought it and brought it to one of my editors when I saw her at a book festival.

Unfortunately, I waited too long. By the time the book went through the acquisition process, another publisher had snapped it up. A publisher whose books I also love, Aldana Libros/Greystone Kids, located in British Columbia with much of the editorial team from Toronto-based publisher Groundwood. Elisa Amado, an outstanding translator of books mostly from Latin America as well as an author of children’s books in her own right, had the privilege of translating this powerful book and did a great job of capturing its tone and power. 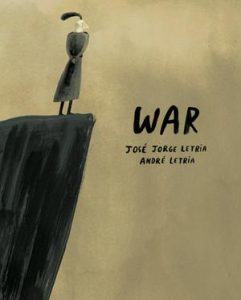 I hope War, written by José Jorge Letria, illustrated by André Letria, translated by Elisa Amado, and published by Greystone in 2021 makes its way into every school and home. It’s the kind of book for all ages that can be understood on new levels as readers grow older and gain more life experience. Too often children’s books glorify or glamorize war and minimize its immediate and long-term impacts. As an avid reader of World War II stories growing up, I can attest to the glorification and glamorization, the “red badge of courage” aspect. While books depicting war for young readers tend to be more honest now, and more of them focus on the costs to civilians caught in the middle, it’s not too early to introduce this picture book War to young children who may believe, still, that might makes right.