This week concludes Women in Translation Month, established in 2014 by critic Meytal Radzinski to highlight the gender disparities of which authors are translated into English from their original languages. In the United States, under 3% of traditionally published books each year are translations from other languages, and only 30% of these are books by women authors. As I found out when I attended a Women in Translation reading at McNally-Jackson Bookstore last week, whether or not an author is translated isn’t just a matter of money and prestige. For some writers, it can have life and death consequences. 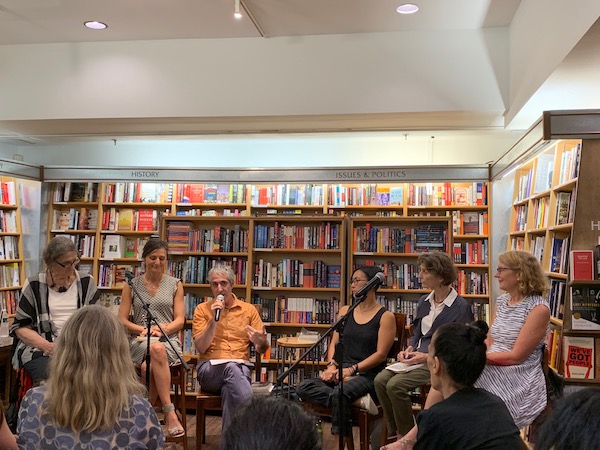 In the panel moderated by Jenny Wang Medina and Alex Zucker, translators Sevinç Türkkan, Anne Goldstein and Jenny McPhee, and Inea Bushnaq read, respectively, from works by Asli Erdoğan, Anna Maria Ortese, and Najla Jraissaty Khoury. The name Asli Erdoğan sounded familiar. Three years ago, she and translator Necmiye Alpay were imprisoned following the failed coup against Turkey’s strongman Recep Tayyip Erdoğan (no relation to the author) in July 2016. Accused of terrorism for their support for a pro-Kurdish newspaper, the two women were incarcerated for four months until an international letter-writing campaign helped to secure their conditional release. As I wrote at the time:

Turkish authorities arrested and held 70-year-old Alpay along with her 49-year-old friend and colleague Asli Erdoğan, who has diabetes and suffered damage to her health as a result of the conditions in prison. In her statement to English PEN, the first of the PEN affiliates to take her case, Alpay sought to draw attention to her friend’s plight above her own, highlighting Erdoğan’s literary accomplishments and delicate health. It was a moving example of solidarity among writers…

Upon their release, the two women writers had their passports seized, trapping them inside a Turkey that could imprison or execute them at any time. Since then, Asli Erdoğan received political asylum and now lives in exile in Germany. 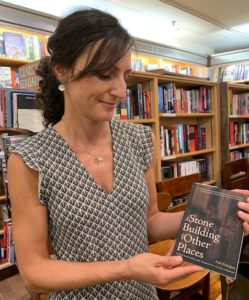 Sevinç Türkkan holds a copy of The Stone Building and Other Places by Asli Erdogan.

Born in Bulgaria to Turkish parents and immigrated to the United States as a teenager, Sevinç Türkkan has long appreciated Erdoğan’s writing. After it was first published in a somewhat freer Turkey in 2009, Türkkan began translating the short story collection The Stone Building and Other Places for herself, as many translators do for practice and out of appreciation for their favorite international authors. As she began teaching at the University of Rochester and translating other books, Türkkan put the project aside but came back to it when she heard that Erdoğan had been arrested. She approached publishers in the hope that they would understand the importance of translating an author whose life was now in danger.

They weren’t — except for City Lights, a venerable independent press that has long devoted itself to books that address topics of social justice and human rights. Last year, City Lights brought out The Stone Building and Other Stories, a collection of three stories and a novella written ten years ago that have proven prescient. All of the stories occur in the sight, or memory, of a stone building — a prison that the readers finally enter in the novella. The first two stories take place in exile. In the first, a former political prisoner is visited by the ghost of her former self. In the second, a Turkish woman whose health was ruined during her incarceration escapes from a sanitarium with five others, two other former prisoners in exile and three German women, to seize a bit of life in the face of sickness and death. The third story follows a pregnant woman to the stone building and what she witnesses outside. In the novella, we go inside, outside, and above, hearing a chorus of stories: lives interrupted, destroyed, ended, and the line woven throughout, “He left his eyes with me…” 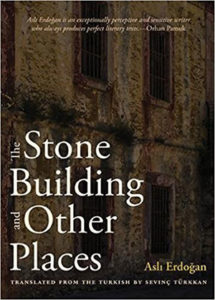 He left his eyes with me. The reader is the witness, bearing the story that the prisoner is no longer alive to tell. In translating The Stone Building and Other Places, Türkkan served as the author’s “eyes,” accepting an award for her when she was freed from prison but still trapped inside her country. Now that she’s in exile, the book’s translation and sales help support her, never an easy task for one trying to recover from the physical and psychological impacts of imprisonment while starting over in a new land.

Before I became a professional writer and translator, I was a small-time music promoter with a special interest in folk musicians from Latin America. That background played a major role in my writing of Gringolandia, but at the time, a principal reason for doing it was to bring these musicians — some of whom had been imprisoned under the dictatorships of the 1970s and 1980s and others who were working underground to bring democracy to their countries — to the attention of audiences and, through the audiences, to political leaders in the United States. We knew that unknown people rotted and died in prison for standing up for their rights, and we knew that once those people became known, they had more protection. Those in power knew people outside the country were watching. If the artists ended up in prison, we would flood the authorities with letters. We would embarrass the regimes and call on our representatives to impose sanctions. Sometimes these tactics didn’t work, but for those writers and musicians who were visible, more often than not they did.