The “Translating the Future” conference ended yesterday, twenty weeks of presentations culminating in four days of marquee events. In all, 86 people presented on a wide range of topics including one titled “Translating for the Future” about translating books for children and teens in which I participated along with Daniel Hahn and Lawrence Schimel. I also hosted the Week 19 panel on “Activist Translation” which featured Jen Hofer, Anton Hur, and Sevinç Türkkan. I felt a special connection to the Activist Translation panel because I’d been part of a PEN letter writing campaign several years ago to free two women writers and translators imprisoned in Turkey, Necmiye Alpay and Asli Erdogan and in 2019 attended a Women in Translation Month reading where Sevinç Türkkan read from her translation of Asli Erdogan’s short story collection The Stone Building and Other Places. 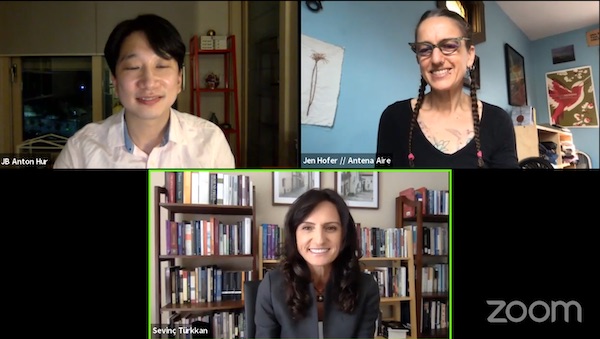 Anton Hur lives in Seoul, South Korea and is manager of the translation collective Smoking Tigers. He spoke about translation as giving a platform to the one person whose work is translated. A translator’s activism lies in choosing which book to translate. He and the other members of the collective have given their platform to women writers and queer writers who struggle for publication within their country and are invisible outside of it. One of the queer writers he translated became a bestseller abroad. He also translated the first Communist writer in South Korea who published without censorship at the end of the military dictatorship. [For more information about censorship under the military dictatorship at the time and what life was like for young people living under it, check out my review of Banned Book Club by Kim Hyun Sook, Ko Hyung-Ju, and Ryan Estrada, published by Iron Circus Comics.]

Türkkan’s experience translating Asli Erdogan’s work reinforced Hur’s point about activism being the choice of which book to translate. She described how her author barely survived prison due to health problems and then was kept under house arrest while awaiting trial on trumped-up charges. Türkkan didn’t start out as an activist — her interest in Erdogan’s writing was at first more literary — but after she translated the stories in The Stone Building, she learned of her author’s plight. She accepted an international award on behalf of Erdogan and sought a publisher in the United States who would bring out the book. After numerous rejections, she found the progressive nonprofit City Lights Publishers, and the book brought additional attention to Erdogan’s case. Right now, Türkkan reported, Erdogan is in Germany, having sought asylum during another award ceremony that she was allowed to attend. Her trial, which went on with her in abstentia, ended up in her acquittal because the Turkish government had no evidence against her. However, she is still stranded in Germany, unable to return to her beloved Istanbul that is the setting of her short stories, because immediately after her acquittal, the government charged her again with the same crimes.

Unlike Hur and Türkkan, who primarily translate authors of literary fiction, Jen Hofer translates documents for migrant workers and their writings into English. Many of these agricultural workers in California don’t speak Spanish but rather indigenous languages, so the translators in Hofer’s collective are fluent in multiple indigenous languages as well. Spanish, she said, is a language of both colonizer and colonized. She commented on the wide range of people who are affected by tyrannies, driven from their countries, and experiencing brutal repression in the places where they end up. A translation practice belongs within a framework of language justice that includes interpreting and training other translators and interpreters. She called on translators to fight against “linguicism” — a term coined by Finnish linguist Tove Skutnabb-Kangas to refer to discrimination based on language — and to engage in active listening with people who speak different languages. While the other translators read from published works of fiction, Hofer read from pamphlets that her collaborative, Antena Aire, has published with the participation of migrant families and their organizations.

Türkkan’s efforts against time to find a publisher for Asli Erdogan’s work raises the question of how translators can engage in activism amid a publishing industry invested in the status quo. In her case, there was a progressive small press interested in the Turkish dissident’s work and able to bring it out in a timely manner. This speaks to the need for us activists to support small presses, to make sure they’re there when we need them and when authors facing repression around the world need them. Hur talked about the power of a translation collective, multiple translators who can identify projects and act as a kind of agent to approach both small independent and major corporate publishers. Hofer talked about independent publishing, what Antena Aire does, but with the weight of the group’s many members and supporters behind the publication.

The Activist Translation panel was a fitting prelude to the next week’s concluding events, which addressed the role of translation in democracy and its future in what may be a post-democratic nation, multilingual New York City, and the perspectives of Nobel Prize winning novelist Olga Tokarczuk’s many translators. If you would like to hear recordings of all of the events, they’re available through the website of the Center for the Humanities, CUNY. If you’re a translator or considering becoming a translator, they are worth a listen. 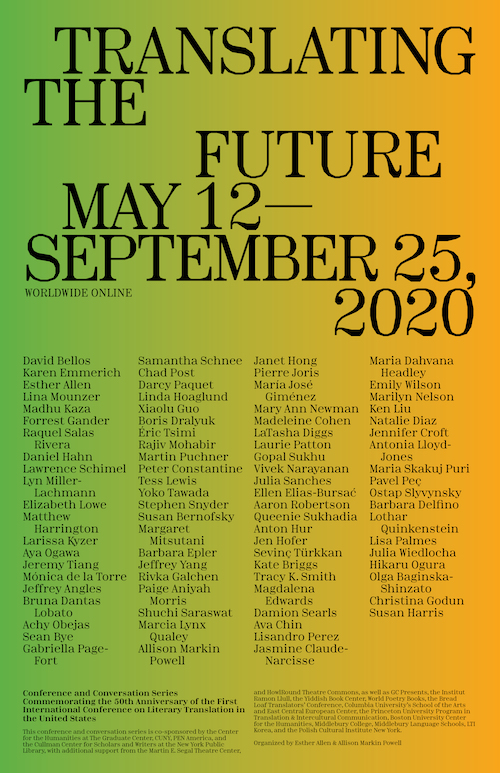